I don’t know what the universe wants from me any more. I really don’t. Every time I try a game that I think is the worst one ever, reality at large gives a cackle of malevolent glee and spits out something far more awful. I remember playing Tales Of Zestiria a while back and thinking I had reached the pinnacle of what was, paradoxically, the lowest point that gaming had to offer. How naïve I was! Since then there’s been a ton of crappy mobile games, the Steam Early Access garbage, the games that ended up technically broken or flat-out non-functional, and all the tedious franchise maintenance gruel that comes with a billion dollar budget and ten cents worth of good ideas. Then most of those would be topped by my attempt to play more than twenty minutes of E.T. without my head falling off, which would in turn be peaked by the actual revolted anger I felt when enduring Duke Nukem Forever.

But you know what? DNF is still a game in the most technical sense. It achieves that function, however imperfectly. On the other hand, Plumbers Don’t Wear Ties is… Well, I don’t honestly know. I wouldn’t even know where to begin, this thing beggars belief and probably buggers beggars for good measure, so confusing and abhorrent everything about it manages to be. Within five minutes of starting it up my jaw was hanging open, within ten minutes my eye was twitching dangerously, and within the first quarter of an hour I had run to the kitchen cabinet to find any sort of alcohol or cleaning fluid with which I could chemically numb the experience. After the forty-five minutes it took to beat this thing, I was in the foetal position in my chair, eyes wide and staring into the middle distance.

I’m genuinely worried that I’ve irreparably damaged my ability to critique games by playing this thing. I’m concerned that now I’ll be grading all others on a curve so steep that it looks like a mobius strip. I’ll be playing Dog Punching Simulator 2017 and thinking deliriously to myself “well, at least it’s not PDWT! Give that sucker a ten out of ten!”

You ask for context, but I can give none – this game confuses me as much as it confuses you.

I’d always known about this thing by reputation, but by all accounts the game had been lost to time and to the uncaring march of technology… And then that changed a few months ago, when some noble fool committed to the cause of archiving gaming history found a working copy and made a functional port for modern computers, putting it online for the world to…

Well, not enjoy, but at least acknowledge. Preserving culture is certainly an admirable sentiment and one I’d normally be fully in favour of, but a big part of archeology is knowing what relics to put in a museum and which ones to throw back in the dirt, lest they pop open and melt your face off. And Plumbers Don’t Wear Ties does make me feel like how the Nazis must’ve felt at the end of Raiders of the Lost Ark – screaming in agony and begging for forgiveness from a callous, uncaring god.

Our epic odyssey starts with two characters so utterly boring and bland that I can barely remember that they exist even while looking at them. Turns out that Dick and Jane are each being pressured by their respective parent to pump out a couple of kids with a suitable breeding partner… At which point the whole story goes off the rails so hard that the buffet car is now orbiting Jupiter next to the monolith. So suddenly there’s a naked shower sequence! And then there’s a live audience cheering, though there was no suggestion of one up until now! Then there’s the most generic music in existence, looping over and over! Then there’s a narrator introduced fifteen minutes in, wearing the rooster mask from Hotline Miami and sitting next to a Benjamin Franklin statue, which is followed by a goofy slasher sequence over a girl in her underwear, which in turn precedes the introduction of a second narrator in a karate uniform! We’re two thirds of the way through the plot at this point, and somehow both nothing and everything has happened!

Baffling and poorly photographed pictures run in a frenetic, hideous slideshow, whilst the audience is forced to listen to some of the worst dialogue ever written laid over the top.

“Disconnected” doesn’t do it justice. Trying to link the various ideas displayed in Plumbers makes me feel like a a conspiracy nut stringing together blurry photos of the JFK assassination and Bigfoot sightings on his apartment wall. It leaves your head spinning, but there is something darkly fascinating about witnessing such narrative anarchy. The subject matter and story direction changes with the wind, ricocheting from idea to idea like a fly trapped in a glass box and resulting a story so chaotic that you’re liable to end up feeling seasick. I thought I was numb at this point to poor characterisation and crappy writing, but I actually ended up screaming the words “what am I watching?!” at the screen, multiple times in the first half hour.

So you see my problem here, right? My ability to critique a game is dependent on there actually being a game to critique, not a set of unrelated images, words and sounds that plays like a damaged PowerPoint Presentation, designed by a lunatic with a fetish for blondes and bad photography. I feel like I’m staring down into an abyss with no visible bottom, but I have news for you all – the abyss doesn’t stare back into you. That would be poetic in some manner, and poetry requires at least a third of a functioning brain, something that was not available of the set of PDWT.

Now I have calmed down somewhat, let me try and explain “the gameplay” of this thing in detail. You’re presented with a slideshow of images that will be vaguely connected if you’re lucky, with a combination of sounds and narration playing over the top in an attempt to contextualise them and generate some sort of story. By the way, this audio design includes some of the most wooden voice acting and dreadful dialogue I’ve heard from… Well, ANYTHING, and I still remember seeing teenage couples trying to flirt with each other. Then, roughly every ten minutes or so, three text boxes using ugly font on a monochromatic background will pop up so you can choose one of them, and each one leads to a different slideshow with the same problems as before – or maybe even worse. 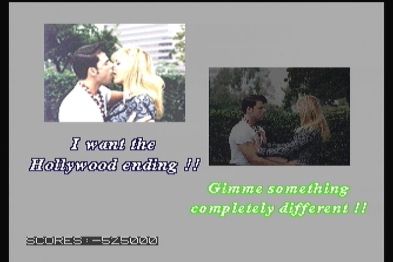 Your choices of where the story goes are short, but certainly not sweet. The flavour left in my mouth was more along the lines of “burnt ash and failure.”

How do you know which text box to pick, by the way? God fucking knows! The game – and sometimes the characters themselves – will berate you every time you pick the wrong one, but the correct answer seems to be arbitrary to the point of being best deciphered with a set of tarot cards. The overall goal is to bring Mr. PornStar Plumber, Esq. and Ms. Hooters’ Employee Of The Year ’87 together in a healthy relationship, or at least what this game considers to be a healthy relationship, which is less “Casablanca” and more akin to “Debbie Does Dallas.” But when I failed to set them up early on and the male lead ended up dating a gay criminal, I actually cheered. Not because I was rooting for them to get together – I wasn’t, that’s more investment in this saga than any sane person could maintain – but because it led to a GAME OVER screen and gave me the opportunity to get a refill of rum that would help ease the pain of my second attempt. Why couldn’t I get my booze earlier? Well, clearly installing a pause menu or a save/load option was a bit more than the budget could handle, so once you start the story going you’ve basically stuck for the next hour watching it play out.

It’s also a blisteringly sexist game, but that practically goes without saying with a premise like this. Our female lead spends the first few scenes staggering around uselessly in a shirt that shows enough cleavage to embarrass Elvira (and with far less charisma and self-awareness than Cassandra Peterson ever showed), before that shirt is removed from her entirely as she runs through the streets screaming like a damaged kettle. Even when the narrator is replaced by a female one, she is later shot to death by the original using a Nerf Gun. I’ll say it again – what the hell am I watching? And more importantly, when in god’s name can I stop?!

You know you’re onto something terrible when the cast looks less interested in being there than you do.

At the end of the day, the question is this: can PDWT provoke enough “so bad it’s funny” amusement to justify the effort required to hunt it down? Um… Well, I never really laughed playing it, but I’ll admit to being impressed by the amount of paint that would’ve presumably had to be huffed so as to inspire the scriptwriters. Maybe you could hunt down a recording on YouTube just to witness this mess firsthand, but for the love of God, if some time traveller offers you a copy of this thing and asks for actual money in return, punch them in the nose for that insult.

So it is with great humility that I bestow upon Plumbers the worst scores I am capable of offering – two thumbs down, one hundred percent rotten, five Piers Morgans out of five, and yes, the holy grail of holy crap – a zero out of ten. There is nothing in this thing that works on any level, as the whole game just ends up being insulting, baffling, or terrifying. Should I ever commit suicide, the associated note will be written on the back of the game’s box, and will be over in five words.

“Can you really blame me?”

The worst game I’ve ever played at time of writing, Plumbers Don’t Wear Ties appears to have made just about every poor decision a game’s creators could make. My eyes, my soul and my hard drive have been forever tainted, and the only time I felt anything positive for this game was the stab of envy that occurred when I saw how easily and how efficiently the file was deleted afterwards.

Oh, and happy two-year anniversary/one hundredth article, by-the-by. Huge thanks to everybody for enjoying my work and suffering alongside me all this time. Even when there’s crud like this, it’s still more fun than I’d ever admit, and you guys make it worth it.