Well. That was… Something.

In light of the controversy surrounding Haydee, it almost feels pointless to offer a critique of how it holds up on the level of gameplay. After all, everybody who’s played it or seen footage of the titular protagonist (and I choose that word very carefully) has already formed their opinion. Either you hate it for being sexist, you admire it for being subversive, or you love it disproportionately because a group you don’t like hates it. Or, contrarily, you hate it for the same reason. Or maybe you just have a fetish for women with buckets on their heads. Que sera, sera.

The point is that writing around the subject feels somewhat irrelevant, but that never stopped me before. So I’ll come right out and say it – a few gameplay ideas in Haydee are basically OK. Doesn’t matter if the main character is a sexist throwback or a powerful gender-icon when it comes to that angle, any more than Hideo Kojima’s sub-par writing skills change the fact that it’s fun to choke Russians in MGSV.

The game prides itself on insane difficulty, and that is certainly warranted. You meander around the sexbot research zone of Aperture Science Laboratories, and a number of things will contrive to kill you before you find the way out, or at least locate a loose, comfortable sweater. Evil robots, lethal drops, your own stupidity – given time, one of them will finish you off. At their best, these deaths usually feel like challenging but justifiable failures, in the manner of my lovely, lovely Dark Souls. My masochistic urge for a game that won’t put up with any nonsense is well-documented, and I was kinda hoping that Haydee would scratch that itch between sessions of Super Meat Boy. 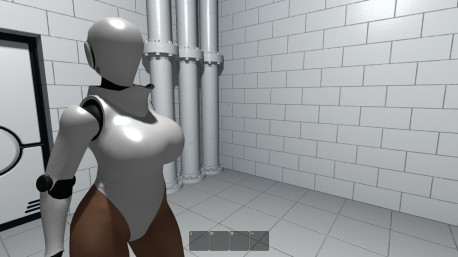 <THE AUTHOR DOES NOT FEEL BRAVE ENOUGH TO WRITE A COMMENT OF OBSERVATIONAL HUMOUR REGARDING THE ABOVE IMAGE. PLEASE SUPPLY YOUR OWN HUMOUR AS NECESSARY.>

But at their worst, the deaths feel cheap and frustrating. I’m happy to admit that when some long-limbed android rattles towards me and I put five bullets in the wall next to his head, the fact that he proceeds to kick my notably ample arse is only because I wasn’t good enough to stop him. But when his brother sidles up alongside me with no warning and caves in my head before I know he’s there, that feels cheaper than a pre-sucked penny sweet. And with save points being few and far between, getting mangled unexpectedly is almost as annoying here as it is in real life.

Which is to say nothing of the camera breathing down your neck the whole time, because god forbid you find yourself unable to examine Haydee’s body at any point in the game. I’m sure that’ll mitigate the rage of being tackled to the ground by HAL 9000’s big brother, especially when climbing up platforms is done in two stages – the first one of which ends with Haydee awkwardly bent over the surface, just so we can see right up her exhaust port and embarrass ourselves when somebody comes into the room.

But I realise I get ahead of myself, and must describe the core gameplay ‘ere I ramble off into total irrelevance. Well, it’s not easily summarised. I suppose I get flavours of Deus Ex: Human Revolution, with a tiny bit of ‘dat Dark Souls added in and some classic elements of old Metroidvania, all set in locations from Portal that were considered too boring to be included in the final product. You scrabble around a clean underground lab in third person, picking up every gun, medkit, keycard and bit of ammo you can find. You also climb and jump around from platform to platform (which as mentioned, manages to feel more uncomfortably pornographic than Debbie Does Dallas) in order to move on and explore non-essential areas for more equipment that’ll help later.

The story is far less comprehensive. Our hero, presumably named Haydee, is seen in an enormous science facility, where the only inhabitants appear to be aggressive robots and dead, mechanical blow-up dolls. There are some elements we can piece together, for Haydee herself is one of these buxom sexdroids, and the fact that her unmoving predecessors can be found up ahead, all damaged from some sort of attack or fall, implies that you are not the first to try and find your way out. 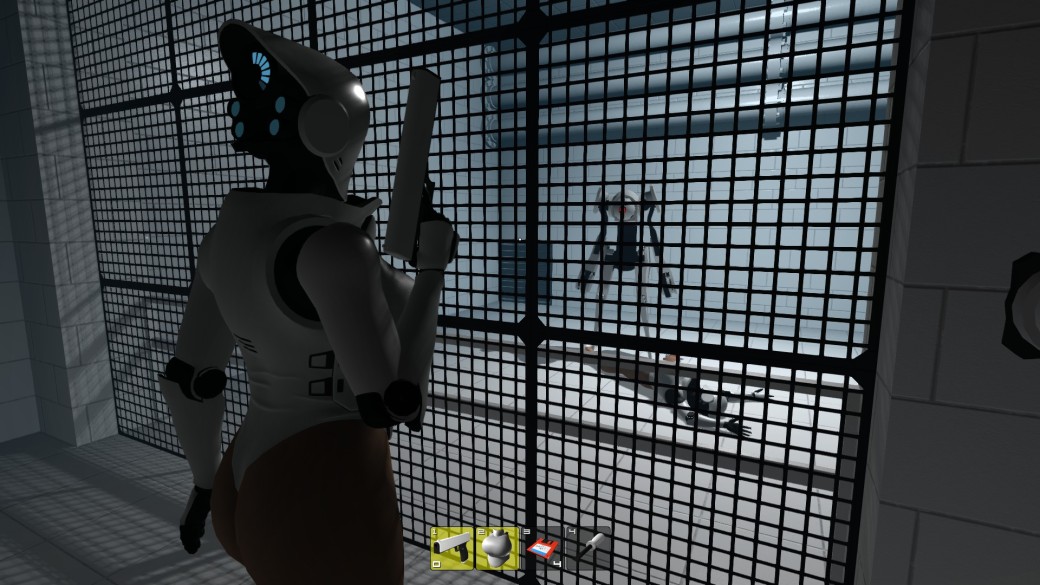 But which one of us is really in a cage? Oh, it’s the robot. Seems pretty obvious now, but it’s quite hard to see with no eyes.

Or something like that, I guess. The game honestly didn’t seem to give a rotten fig about the possibility of narrative for the time I was playing it, and the broken iHookers only seem to exist to highlight which areas are fatal to fall into. The game clearly has its own opinion on what demands more attention than story – namely white panel walls, removable ventilation grates, and jiggle physics. Lots and lots of jiggle physics.

But there are things about the game I can appreciate. The minimal HUD feels nicely unobtrusive, and clearly somebody took inspiration from Dead Space and stuck Haydee’s health bar on the back of her helmet, making it an organic part of her design. Well, not organic, strictly speaking – oh, you know what I mean.

I also appreciate the fact that the game has some genuine ambition to present real challenge. Sure, I’m not too hot about the infrequent save points and the fact you have to hunt out the items needed to unlock them, but I always love a game that actually asks that the player wake up and pay attention in order to succeed. And though some deaths feel cheap and unwarranted, most of them do feel like my error and not the game’s.

And of course, I am completely on board with an emphasis on exploration, which demands the player make note of their surroundings and return to previous areas in order to be as well-equipped as possible.  Yeah, you can charge ahead and try to smother enemies with your ridiculously-sized chest, but you aren’t likely to succeed if you haven’t been snuffling around for ammunition like a Texas-born truffle hog. There’s also something rather effectively creepy about the robotic enemies, which silently move on you with clear purpose in mind, in a manner that can only be described as “advancing.” They even generate a few organic jump scares as they lurch into view, so I can’t say the game didn’t effect me.

Day 3 in the Kardashian manufacturing facility…

That being said, the things I don’t like are more frequent, and start to get on my plums pretty quickly. The too-close, lecherous camera is one bugbear, and the unwieldy controls are another. I also don’t appreciate the fact that the plain, unremarkable environment gets old to look at very fast, and that there’s something rather unfinished and lazy about certain aspects of the game. Character animations are few and far between, the creators seem unwilling to give the player any information about what’s going on or how to play, and the lack of story feels less like a stylistic choice and more like nobody could be bothered to properly contextualise the events.

Is that everything? It is? Because I can’t think of anything else to address before we OH FINE I’LL TALK ABOUT IT.

Let’s get down to brass tacks. Is this game sexist? Well, for a while I didn’t want to think so, partly because I was still kind of enjoying the gameplay and didn’t want to be seen to associate with something unseemly. After all, I have a paltry façade of a reputation to vaguely maintain. What could be more important than that?

At first I was mainly wondering if Haydee were some subtle, elaborate satire. Our protagonist is literally a set of sparsely-covered curves with no head, voice or obvious agency. Most notably, the heroine is sporting a blank plastic panel instead of a face, which in itself is so absurd as to imply self-aware, wink-wink acknowledgement. It comes across as ridiculous to consider, so defiantly backwards in tone that it makes me wonder how seriously this was all being taken. For god’s sake, the two difficulty modes are named “hardcore” and “softcore.” Could it be that all those sputtering Tumblrites were getting their piercings in a twist over nothing more than a simple satirical statement? It wouldn’t be the first time that people on the internet went insane for something that didn’t really matter either way.

But on reflection, I’m not convinced that Haydee is a satire. It’s actually not outrageous enough to come across that way, and with no story to tap into that parody potential, it feels more genuine than anything else. When I saw that the keycards all had pictures of topless women on them, I realised that this was exactly what it looked like to begin with – an unremarkable game with a few titillating elements added to draw people in. Whether that’s fine or not is up to the individual. You might call it harmless exploitation of the kind all entertainment has been engaging in since cavemen could first draw blood and nude stick figures on rocks. Or you might call it a regressive, demeaning fantasy that we should’ve gotten over around the same time. I can understand both, but it’s probably not empowering either way. But maybe it’s not trying to be. Maybe it’s happy to be stupid, sexy fun. Maybe it’s at too high an ethical price to be worth another depressing female archetype. Honestly, I’m starting to lose interest in both this subject and the game as a whole.

It’s an easy joke, but somebody had to make it.

Which can act as my closing point. Haydee is a little too rough, a little too minimal and a little two unimpressive to be anything more than a time-waster, unable to capitalise or develop the good ideas that dwell within it. I couldn’t be bothered to play beyond a certain point, so maybe it picks up later – but I don’t care. I have limited recreation time in my life, and I ‘aint putting those valuable hours into watching Cave Johnson’s secret fetish fall into pits and perform revealing gymnastics routines. Maybe pick it up if you see it on sale, or find yourself attracted to mannequins. Otherwise, I can’t really recommend.

Haydee is a somewhat solid premise that isn’t refined enough to hold up on its own terms, so it throws in the headless Playbot as the heroine and hopes the bouncing jubblies will distract you from your growing boredom. Unfortunately, it doesn’t.