I have a soft spot for indie game development, as everybody who reads my work knows. I tend to be kinder in my reviews, more encouraging in my feedback, and more willing to part with my money when it comes to that final choice of buy/deny.

And that’s because indie game development is very important to the gaming community, perhaps more so than the big AAA stuff that gets the most attention. Gaming was founded on small projects made by people working out of their homes and universities, and even now the indie stuff feels like the most creatively liberated section, willing to take risks and make artistic statements – so good on them.

And because of that, I was approaching Pony Island with a certain amount of hope and expectation. After all, the information I picked up was certainly positive, and it all seemed to gel with the sort of things that I like. Classic arcade gaming with a subtle depth beneath it? Intriguing. Subversion of traditional visuals by infusing them with a darker edge? That can certainly work. Shooting Jesus in the face with a laser made of Matrix code?

So Pony Island is a very short game that uses fourth-wall humour and underlying metacommentary in the main story, with a deceptively cheery old-style arcade game appearance presented as a façade over the whole thing. The façade falls away as we progress through the game, and as it becomes more clear that certain forces, both good and evil, are trying to manipulate you into performing actions that will have far greater consequences than achieving a new high score. 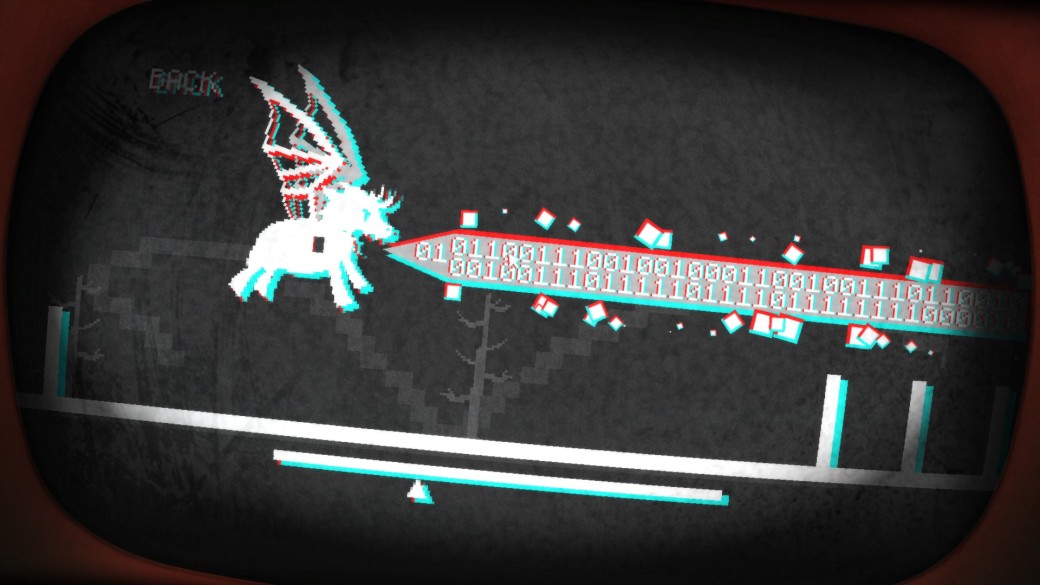 Now, I double-checked the timing on Pony Island’s release, and saw that it came out only three months after Toby Fox’s modern classic, Undertale. So I certainly won’t say that Pony Island was made out of some rushed attempt to leap onto an existing bandwagon, because most game development takes longer than three months. And like I said: it’s indie development. I want to be kind here.

But if it’s not guilty of being a copycat, it may be a victim of unfortunate timing. It certainly hits a lot of the same notes as Undertale. There’s a villain who seems exaggeratedly cute at first, there’s retro-gameplay altered in theme to meet modern sensibilities, excessive levels of games-talking-‘bout-games and even the same ending as Undertale, with one of the characters speaking directly to the audience and asking them not to player the game anymore.

An instruction I was all too happy to follow, as this is the question that was plaguing me throughout the two or three hours necessary to win: if Pony Island is a spiritual successor to Undertale, why do I love the latter whilst finding this new pretender rather insufferable?

It might be because the story feels a little bit too much like a gimmick, and doesn’t really know what to do with the good ideas it does have. To begin with, the game is way too excited about throwing away the initial illusion of cutesy “My Little Pony” visuals, which barely lasts five minutes before we get the darker stuff overriding it. We’re not even half an hour through before they’ve broken out the demonic pentagrams and creepy music. Oh look, a game about unicorns jumping over gates is actually a scam utilised by the Devil himself to gather souls. Man, that’s not something I’d expect Uncle D to be using. What? No, I’m not yawning. I’m, uh, silently gasping in terror. Yeah, let’s go with that. 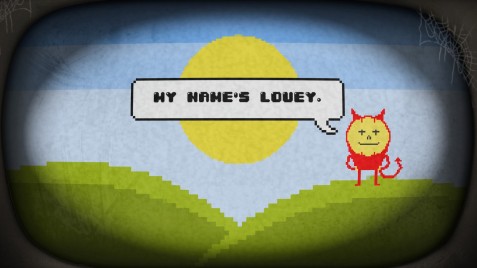 Lovey the Flower! No, hold on.

Which brings me to my second point – shouldn’t the antagonist be more threatening? Shouldn’t I feel more of a motivation to win? Undertale made me scared of a smiling yellow flower, and Reigns was clever enough to make a lovable dog seem unaccountably creepy. But the devil here just feels like an annoyance, something that throws a multitude of inconvenient (but by no means concerning) obstacles in your path. It’s like trying to write an essay, and every couple of hours somebody pops up and deletes a random sentence. Pretty weak stuff, I think you’ll agree. And with no real characterisation for either the player character or the NPCs, I never get the sense of anybody actually being in danger or grief. At one point the player is allegedly sent to sleep and trapped for three centuries, but so what? We see no consequences; we don’t become bothered by anything. We just sit back down and keep playing. Why is this supposed to concern me?

And the metanarrative is just as shallow, highlighting why such ideas can either turn out as gold or mould. Maybe I should stop belabouring the point, but Undertale was wise enough to initially keep its bigger ideas in the background as underlying subtext, and then had them emerge forward as the game progressed. So it starts off by drawing us in with characters, then doubles down by connecting the more philosophical stuff to the main plot later on. It also had much more interesting ideas than this game. What would the ability to save and repeatedly reload your life do to a moral mind? How would the ideas of grinding for experience or trying to reach total completion look in a real-world context?

Pony Island doesn’t seem to have any thoughts on that level, or even any real thoughts at all. There are moments where you step away from the fictional arcade machine you’re playing, and bits where you get on the developer’s nerves by cheating or playing unfinished levels, but there’s no deeper meaning to any of it. It’s just… There. I guess it’s meant to be funny, but I didn’t find myself laughing – the ultimate nail in the coffin of the comedy game.

Which isn’t to say there aren’t parts I like. Or perhaps I should say part, singular. It’s just one scene, but it’s a very clever scene where you have to keep your eye trained on a certain entity to see how it changes, and the game tries everything it can to distract you, to make you look away. I won’t spoil what happens, but needless to say that the game really does pull out all stops and makes it near-impossible that first time you try, utilising the kind of tricks I’d never expect, yet somehow manages not to feel cheap in its tactics. There’s no deeper meaning behind it, but that doesn’t mean the basic idea in that scene isn’t clever and well-made, so due respect there.

Because it’s better than the gameplay, which was definitely getting to be a chore by the end. I suppose it’s in keeping with the joke that this is silly, shallow arcade gameplay, but let’s remember something – you’re still making me play a shallow arcade game. For lengthy periods of time. That might not have been the smartest move to perform on somebody who’s already losing patience with your creation to begin with.

There are two forms of core gameplay: the platforming sections and the hacking sections, and they both suck. The former is briefly entertaining until the developers run out of abilities to give you (two), having you jump over obstacles and blast enemies with your mouth laser in 2D side-scrolling perspective. But once it’s gotten those bits out the way, the game has nothing more to offer action-wise, except for the occasional alteration in who you fight. But considering Code Genie, Angry Flying Skull Thing and Lord Giant Boss Demon Monster Sr. all go down with a hearty dose of tonsil beams to the face, there’s no real change that comes across as significant to the player.

But it’s better than the hacking, which is represented by that age-old pipe-water game AGAIN. The game does its best to hide it by adding a heavy computer-code aesthetic, but it’s still steering an object around a grid by swapping out directed sections of a maze. Pony Island, we talked about this just a few days ago. I know Bioshock was an incredible game, but it’s now widely accepted that hacking the vending machines was the one element that sucked more cock than a hungry leech in a chicken coop. Out of all the Bioshock aspects you could’ve taken inspiration from, why that one? It’s like deciding that the best part of National Lampoon’s Vacation is that racist scene in the city slums.

I’m torn on to whether to recommend Pony Island or not. On one hand, it is incredibly cheap at only four pounds, and some people do really seem to like it. Not to mention that if I’m going to give my money to anybody, I do want it to be small-scale artists trying to succeed with creatively interesting ideas.

But on the other hand, I don’t like this game! Four pounds isn’t much, but paying any amount of cash for an unenjoyable experience is wrong. That’s why going to visit distant relatives for Christmas is so utterly depressing, and why you usually bring heavy amounts of booze to compensate. But I didn’t have any alcohol to hand with this one, and when my flatmate asked me to help her tidy the kitchen, I was only too pleased to escape. 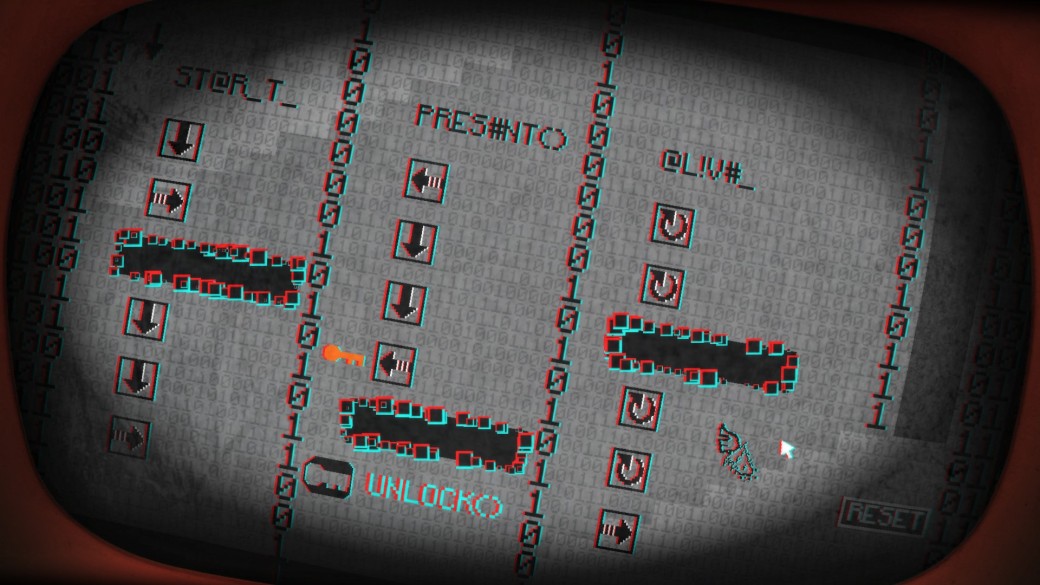 Though I did get to what seems like the canonical ending of Pony Island, the achievement list does suggest more gameplay and narrative hidden in there somewhere… But I don’t care. My work is officially over when the credits start rolling. If you want me to play more than that, you need to seduce me with some good material, and you can consider me as dry as a nun on this one. Maybe give it a try if you like your fourth-wall humour, or have just taken a great deal of drugs and need something entertaining in the background.

Pony Island has high ambitions, honourable intentions and even a few good ideas – but none of them ever amount to much. Generally inoffensive but nowhere near as original as it believes it is, the game becomes boring and eventually meanders into the frustrating.