Right then – The Witcher 3: Wild Hunt. No preamble, no introduction, this is a sodding big game with a hell of a lot to discuss, so let’s get straight into it without any of the ethereal, “ooh, look at me do a big fancy set-up” malarkey. I’m not even going to do a joke about the fact that the subtitle sounds like rhyming slang, that’s how determined I am to get at this quickly.

So, Geralt Of Rivia is back in the third and final installment of the big-name adaptation of a polish fantasy series, growlier and grizzlier than ever. Gerry himself is the aforementioned witcher, a freelance monster hunter whose day job involves showing up in villages, asking if they need any bogeymen killing, then hunting the beastie down and stabbing it to death with one of two swords. Then he collects a paycheck and moves on to the next settlement. The reason he can do this so well is because he’s the best human being that ever lived, a combination of Aragorn and Wolverine by way of a hard-bitten private detective and a bucket of gravel.

I do really like this mission statement as a core concept though, and the monster hunting missions are probably the best part of the game. Geralt investigates the scene of the crime, identifies the monster from certain clues, then tracks it down and defeats it either with a bit of swordfighting, or finding the exploit needed to banish it to the afterlife. And all the uglies you’ve got to assassinate are quite imaginatively designed, in a grim and ghastly kind of way. Sure, there’s the staples of violent fantasy enemies, like werewolves, zombies and golems, but there’s also some really fascinating concepts being added to the formula. The one that stuck with me was a type of malevolent spirit that can only come from the body of a miscarried child. As dark and horrifying as it was, it was certainly more interesting than having to kill yet another silly necromancer with futile dreams of immortality. I think I’ve killed so many dark wizards in fantasy RPGs that the profession must be in dire need of a recruitment drive.

Oh yeah, Wild Hunt is an RPG, though not to any greatly important degree. You can power up certain spells and types of melee attack as you level, but generally the best strategy is to just decide which attack patterns you find most fun and then just start pumping all your points into that until you’re guaranteed to win. I found equipment to be much more important than Gerry’s personal stats, and that basically came to just swapping out gear every time I grabbed or crafted something that had green numbers instead of red ones. And when you buy the spell that causes enemies to fight for you then the game has very few challenges left, besides a few boss fights where they have the sense not to go shiving allies just because you asked nicely.

Fighting is a bit like a more maneuverable Assassin’s Creed, crossbred with the light-armour character build from Dark Souls. You slash your way across the battlefield, parrying when you can and rolling away when you can’t, occasionally throwing out spells and bombs if things start getting hairy. It’s just that there’s a few problems with it, the big one being that Geralt is strangely unwieldy, even out of combat. He always overshoots when he’s running somewhere and never seems to be facing the right enemy, instead locking on to some useless sidekick. And parrying is tricky enough to be essentially pointless against anything that isn’t a regular bandit with a sword, as it’s impossible to say when you should parry, whether it would work against that attack, and if doing so will leave your bearded arse stunned or not. I’d get used to rolling around like a wheel of cheese if I were you.

Of course, you could take time to prep for fights. Once you’ve fought a creature or read about it in a book somewhere, you can look it up in Geralt’s personal monster manual to see what it’s weak against. So if you fought a jam elemental last week and you know there’s one coming up, you can thumb through to its IMDB page and see that it would help beat it if you started putting butter on your sword, as well as using some spells created by the devious sorcerer Lord Warburton Hovis.

This research angle was an idea I found curiously satisfying, rewarding intelligence and forethought, not to mention reinforcing the concept that this is something our hero does for a living. The problem is that it doesn’t account for much, certainly not as much as I’d hoped. “Weakness” translates to a 10% damage increase from certain spells and single-use items, which was so insignificant as stats go that I usually didn’t bother. Every now and then you’d find an enemy that would need those exploits, like a ghoul that was invincible until you cast a certain enchantment on it, but these fights were a minority and I found myself wishing the Big Book O’ Bad Guys had been more important for survival.

But that assumes that you spend the whole game doing your Witcher day job, which probably isn’t true. The main story concerns Geralt searching for his adopted daughter Ciri, who has even better superpowers than his and for this reason is constantly being chased by a bunch of evil viking knights who want to harness her power. Along the way you’ll get dragged through a cavalcade of memorable locations and meet enough people to populate a large island, most of whom just happen to be busty women with strong personalities, magical abilities, low-cut tops and irrepressible libidos. What a strange coincidence. 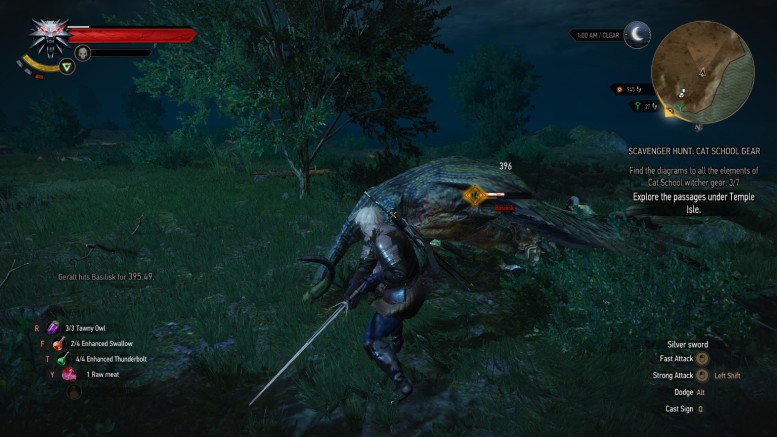 I hope this creature has a nest that needs killing. That way I get time-and-a-half.

As mocking as that sounded, it’s not poorly written by any means. I actually really like the storytelling in Wild Hunt, as it blends a certain style of creativity with nuanced characters and ethical complexity, though admittedly there are a few aspects I’m unimpressed by. There’s a dark-haired love interest who was less fun to be around than a tapeworm, and I’m bored of seeing generic racism sub-plots with elves and dwarves in fantasy games; but on the whole Witcher 3 comes out very much on top when it comes to writing, using the rather generic, bog-standard setting as a springboard for more impactful ideas and the personal arcs achieved by its colourful cast.

Mind you, the good writing doesn’t mean it’s always simple to follow, as Wild Hunt assumes, perhaps reasonably, that you played the previous two games before it. I’d only ever played the first one and briefly at that, so I found myself having to frequently click out to the biographies menu just to know who I was trying to sleep with that day. I didn’t even find out what the mythical Wild Hunt actually was until about two thirds of the way through the game, as it clearly assumed I knew already. “What, can’t you keep up? Haven’t done your homework? Well, we are going to make damn sure you regret it.”

And whilst I’m complaining about the game not telling you stuff, Witcher 3 has a nasty habit of throwing the occasional choice in your face without telling you exactly what you’re choosing. I’ve nothing against consequence, but it’s a bit raw if you don’t tell me what exactly it is I’m picking, even in the short term.

The worst offender was monetary matters. Being a fantasy ghostbuster, Geralt gets paid by people pretty frequently, but for some reason dialogue trees won’t usually tell you how much money you’re getting offered. At one point I had to choose between taking a big cash reward whilst upsetting a friend, or turning it down on principle and keeping the relationship intact. I figured I’d take the gold, hoping that I wouldn’t need to do side quests for a while and could just focus on story missions with enough to coin to keep in the black. But it turned out after I made the choice that the money I was being given amounted to about a fifth of what I already owned, and the pasty girl still had the gall to whine at me over a transaction that probably wouldn’t have paid for a single visit to the armour shop. I would’ve gambled it to make more, but playing poker doesn’t seem to be a real thing in Temeria any more. Instead, everybody’s playing with Pokémon cards. Yes, I’m being completely serious. 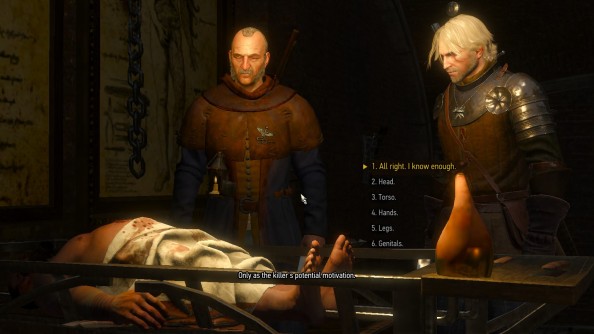 OK, I know I sound like a broken record, but we can check the genitals a couple more times?

It’s called Gwent, and basically it’s a really boring card game that seems to have taken the land by storm for some reason. There’s a bunch of side quests and tournaments related to it, but I avoided all of them after my first attempt playing almost put me to sleep. I’ve nothing against card games, I like Hearthstone and Magic: The Gathering, but Gwent is rather shallow and dull by comparison. All I can say is that there’s an absurd humour to watching thieves and murderers in scary taverns arguing over attack power and trading little pieces of paper with no irony whatsoever.

To conclude with, Witcher 3 is an odd duck, as it’s a classic example of the whole being greater than the sum of its parts. What do I mean by that? Well, Wild Hunt should be a solid 7 on a purely logical analysis. It’s a fine set-up with a good narrative and visual artwork that’s hampered somewhat by flabby design, a little unrealised potential, fairly dodgy optimisation and a lot of Americans doing British accents – yes, we CAN always tell.

But I can’t deny that despite all of these things I kept running back to the Witcher for more. After the tedium of the first game I wasn’t expecting much, but Wild Hunt manages to click in just the right way, fitting together as elegantly as a jigsaw and becoming rather spectacular for it. It has problems, but they’re all kind of inoffensive and it works so hard to overcome them that I can’t stay mad at it for long. As compliments go that’s kind of patronising, but I can’t think of another way of putting it. I’m all grumbly and cross about frame rates and minor plot details, but then I’ll come over a hill and see the gorgeous view of a detailed world before me, the silhouette of a griffin arcing through the sky in the distance, and I think “oh, OK. I’ll shut up now.”

So Wild Hunt won me over in a big way. I guess third time really is the charm.

As much as it shows a certain roughness around the edges, The Witcher 3 is a fine example of a game with as much spirit, passion and honest-to-goodness excitement as something like this deserves. If a little less precision is the price to be paid for something as hugely ambitious as this, that seems to be a price worth paying every now and then.