So here we are. In the final week before THAT game comes out and my life is officially put on hold, I was looking for something interesting to play to tide me over to that point. Ooh, check this out – here’s a game about robot soldiers, rogue AI, cybernetic powers and the dangers of surveillance and augmentation. I guess this is that new Deus Ex game that – what? It’s Call Of Duty?!

And this is what it’s come to. The series has utterly given up on realistic warfare, and I say good riddance. For ages it did nothing but fumble about with dull shooting and half-baked plots, trying to recapture the magic of the original Modern Warfare, and I guess Activision have decided they’re done trying. Fair enough, but the problem is that they clearly aren’t sure what it’s being swapped out for.

I wouldn’t bother recounting the single player plot in detail, because there isn’t much detail to it. Needless to say it’s embarrassingly cheesy and plays like a bad action film, but I find I’m not too bothered by this, at least not as bothered as I have been before. I wasn’t expecting much from the start, and at least it’s not coming down too hard on other countries or ideologies, edging away from the standard “Team America” nonsense in favour of a more personal story. This time the villains are a mythical terrorist group with a legitimate grievance, a rogue CIA hit squad and a loopy artificial intelligence that wants to destroy the world. Or save the world, I’m still not sure. All that really stuck with me is that it likes crows and has about as much relation to real science as a unicorn does to a stableyard.

But the gameplay’s been changed, and in ways that are suggestive of some improvement. The big new thing is jet-thrusters stuck all over the player’s body, which you can use to do cool tricks like wall-running, double-jumping and some sort of mega-powerslide that plays as if Jack Black had a firework up his bottom. It makes the combat more reactive, but the trouble is that the older mechanics are fighting this. I feel like BLOPS III can’t decide whether it still wants to be cover-based shooting or not, because whilst you can do all this Rocketeer insanity, all that usually happens is that you get shot out of the air when you try it. Maybe it’ll be refined with the next instalment, but for the moment it’s a step in the right direction, though the journey has barely started.

There’s also a bunch of technological abilities you can use on various enemies such as hacking robot drones, exploding the batteries in ground troops and controlling vehicles remotely. It reminds me a little of Watch_Dogs, but whilst Aiden Pierce would wave his smartphone like he had a genie on speed-dial to make the bullshit hacking nonsense work, the Black Ops player does a generic hand thrust that seems to cover all bases. It reminds me of somebody in Star Wars trying to use the force, and it has roughly the same level of realism.

Ah, well. It’s still more fun than just holding down a trigger and some of these new gimmicks are pretty satisfying. My favourite was a melee attack that allowed you to pull the battery out of a robot’s chest like the priest in Temple Of Doom, before throwing it at whoever was left whereupon it would detonate like a grenade. Yes, yes, yes. More of this, please.

It feels weird to do this without having recently thrown a jar of pee at someone.

You might have noticed that I didn’t give the hero’s name a little while back. Well, I would’ve if I could, but the playable protagonist in BLOPS III is nameless. I suspect the emphasis was on player self-projection, a suspicion that grew when I saw that you could customise the character, but Call Of Duty is clearly new to this idea because, without meaning to be cruel, it’s amazingly bad at it. Customising the player is limited to gender options and few preset faces that all look identical anyway, so it’s essentially a bone thrown to those who like to make their character look like a very specific kind of psychotic redneck.

But what about multiplayer, considering that’s what most people were thinking of when the game was announced? Well again, it’s moving in the right direction, but still needs a lot of refinement. The thing that always pissed me off about Call Of Duty was that the player was wearing half a dozen layers of battle armour and military detritus, yet none of it seemed to offer any protection whatsoever, meaning that you’re both ten square metres of grizzled lunkhead and also cursed with the durability of a bath bomb – a large and fragile target.

And sure, this applies to everybody, but it means that too often combat comes down not to skill, reflexes or even the savvy planning of your character loadout, but to the pathetic question of who saw who first. Even the most elite player can’t do much when a level 6 grunt pops up behind him with a full magazine of ammo in his gun, and that annoys me like you wouldn’t believe, because I’ve no idea what I’m supposed to do about it. Halo 3 (a game that I will forever hold up as one of the bastions of good multiplayer design) usually allowed you enough health and shields to give you time to react to an attacker (barring a few cheap power weapons). And that’s good, it allows for intense firefights and proper gunbattles, rather than reducing combat to a sequence of annoying ambushes that you could never be prepared for. 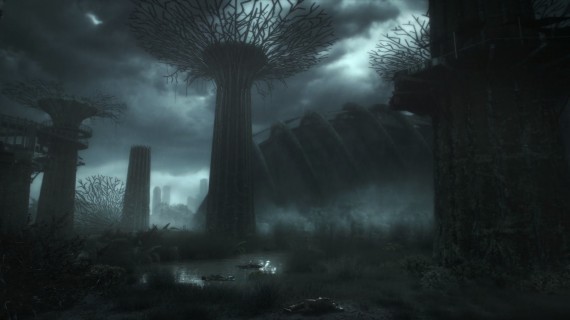 … I have absolutely no idea what I’m looking at.

But Black Ops III doesn’t seem to have realised that yet. The one major improvement is the increase in manoeuvrability, as all the jetpack abilities have carried over from the single player mode. So whilst you can do your best to evade gunfire, it’s only a small solution to a big problem and you’re still pretty easy to shoot as they haven’t done anything to make your character smaller.

I was also disappointed to see that the cyber-powers hadn’t made the transition from the campaign, but instead of those you can pick a sort of specialised ability thing that you pull out of your armoured trousers at certain points in the match, when the timer has clocked down far enough or you get enough kills to earn it.

These abilities vary hugely, but the problem is that they’re very poorly balanced. “Here’s a device that lets you see through walls for three seconds,” Black Ops III might gibber excitedly, “IS YOUR MIND BLOWN YET?”

“Sorry, did you say something?” We respond. “I was a little busy using this instant-kill area of effect attack that clears rooms like a sulphurous fart. Or using the flamethrower which destroys anybody in the nearest postcode.”

So it needs tweaking still, but I confess, I was having fun with it. Wall-running around like a scary Mirror’s Edge villain, kicking off into the air with my jetpack holding me aloft, then coming down guns blazing and bashing a guy’s head in with the butt of my rifle, that makes up for a lot of the shit that I had to endure to get there. In fact it more than makes up for it, including the poor server quality that kept spitting me out to the home screen like I was a fishbone in a bit of tuna.

And finally, what about Zombies? Frankly, it’s a mixed bag. There’s only one map so far, and it’s not very good, filled with extraneous, unexplained mechanics, annoying special enemies and an unintuitive level design that makes distinguishing the different areas annoyingly difficult. I also feel cross about the fact that it makes you leave all your kickass powers at the door. Yes, we know you’ve been enjoying this superb power fantasy, now let’s take away all your fun toys and give you a boring pistol to play with. Enjoy!

Is there something on my neck?

But I do like the aesthetic. From World War II Europe to modern Americana, the series has now picked up a strange mid-20th century Noir vibe, touched at the fringes by the influences of Lovecraft, in which you hunt around misty Gothamesque alleyways with strange occult symbols scrawled on the walls, as if Bugsy Malone had been invaded by Cthulhu. And the characters are nicely exaggerated and amusing, including a moustachioed magician played by none other than Jeff Goldblum, which was something of a surprise. So the whole place is dripping with atmosphere, but it still needs work mechanically.

And that’s kind of the point. My overall opinion of Black Ops III is that there are some good ideas here, but they feel rushed and like Treyarch weren’t trying to fulfil them as best they could. The single player is uninspired, the multiplayer mode is hampered by petty niggles and cheap deaths, and the zombie co-op needs some fine-tuning to bring it to its full potential.

And yet, I do want to go back to it, because there’s enough meat to hold all these things and carry them through to the positive side of the coin. And at the end of the day if a game makes me want to keep playing it even after the review is done, it’s got to be doing something right. Call it a resounding “just about good enough” and we’ll say no more about it. Deal?

7/10
Black Ops III is rough around the edges to an almost aggravating degree, but the exciting movement mechanics and suggestion of innovation to come does enough to make it worthwhile.