It’s been a while since I last saw the pirate ship, escaping it by vanishing into a thick cloud of fog which my trawler’s headlamp can’t even begin to penetrate. My engines exploded some time ago when I pushed them beyond breaking point in a moment of panic, and the resultant fire killed three members of the crew as it tore the hull to shreds. There’s talk of mutiny among the survivors, not helped by the decreasing rations and how far we are from land. Unless I can get them some shore leave or make a diplomatic home run, they’ll turn on me, and my body will be the first thing to go into the cook’s broth.

But I’m in uncharted water, and for all I know there’s no land for miles. Praying to whatever cold and ancient gods are listening, I take a trained zee-bat (a scrawny little rodent, but dangerous in hordes) and release it, hoping for some answer, hoping that it comes back with an olive branch, hoping it’ll find some sign of the civilisation we left long ago.

But what use is hope here? 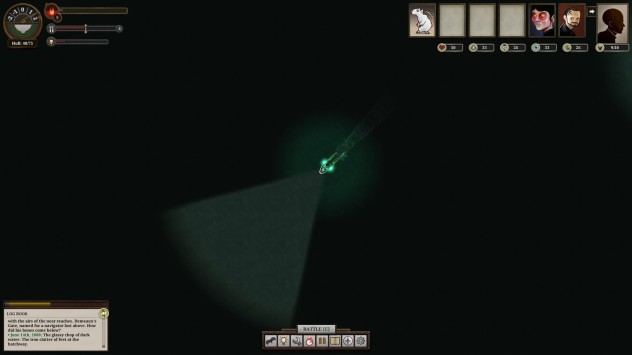 Is anybody out there? Are we even sure if we want that?

This is just one of the events that can plague you in Sunless Sea, perhaps the most original idea this year and set in the same universe as Failbetter Games’ previous title, Fallen London. Sunless Sea strikes me as what you’d get if you merged FTL: Faster Than Light and Darkest Dungeon, as it’s a rogue-like exploration game with an emphasis on psychological horror, resource management, unbelievable difficulty and a set of randomly generated oceans to explore.

Well, randomly generated to an extent. The islands are always the same, but they’re shuffled around like a deck of cards each time you die, which came as something of a shock as the game doesn’t tell you that this is happening. When Captain Joel Franey III was sunk by a giant crab and eaten, his intrepid son Joel Franey IV decided he’d use his dead father’s knowledge of shipping routes to make some mad bank early on. Only instead of finding what should’ve been a bustling market harbour, he ended up bobbing on a featureless section of ocean, a section of ocean containing a gang of bad-tempered eels who had woken up on the wrong side of the coral and were just waiting to kick the shit out of some poor passer-by.

But death’s a big part of it and not to be ignored. Every character you make has different stats based on what their job was and what they want from life, and if your previous captain had money and sense to write a will, then your upgraded ship can carry over to the next guy, albeit with a sizeable deduction in cash to pay the sodding lawyer’s fees.

It’ll take a while to get to the point where you have anything worth leaving to your ancestor, though. Perhaps the most glaring flaw in Sunless Sea is the incrementally slow progress of… Well, everything. All the missions have about a billion stages to them, money comes slowly (if it comes at all) and even the basic act of movement is like watching a slug drag itself across a blue linoleum floor. To make matters worse, if half of your crew is killed then your ship starts moving at half the maximum speed, and considering you weren’t exactly going like lightning before, this just makes it torturous.

I assume that this mechanic was implemented to make you extra protective of your loyal sailors, but dangerous events can come out of nowhere and often take a bunch of able-handed men down into the briny blue. At one point I got jumped by cannibal pirates when I was exploring a tropical island, and my only real option was to fight back, which went less than superbly. Five of my men died then and there, leaving me alone with the ship’s cat, a navigator who would’ve made Iago look trustworthy and some useless bumblefuck who probably couldn’t pick his nose without poking his eyes. It took almost ten minutes of slug-sailing to get back to the one port where I could load up with Redshirts again, whereupon one of them immediately went bonkers and started beating the rest to death. Maybe she was disappointed by the rations, I don’t know, but it was hard not to feel irked by the whole thing.

“And tell the lookout to stop singing “Let It Go!” I warned him three times and it’s starting to effect morale.”

But I suppose it adds to the incredible atmosphere, because it’s in that department that Sunless Sea shines, paradoxically enough. I didn’t make that early comparison to Darkest Dungeon and FTL lightly, as it’s not just sandwiched between the two when it comes to mechanics, it seems to occupy the chronological midpoint between future and fantasy – a highly fictionalised version of the industrial revolution.

Slap-bang in the middle of the Her Majesty’s British Empire, the mighty jewel of London is pulled beneath the earth, into a subterranean chasm that stretches on for hundreds of miles colloquially referred to as “The ‘Neath.” There are already weird creatures living here though, including dangerous gods, mercantile devils, mysterious families and colonies of bandaged undead. And far out, beneath and beyond the waters of the enormous ocean that occupies most of this cavern-covered land, worse things are lurking, hungrily waiting for the unsuspecting fools who explore the waves to release them from their aquatic prisons…

If all this sounds really fucking cool, that’s because it is, reading like somebody took Alan Moore’s “League Of Extraordinary Gentlemen” and had Cthulhu stamp it through to the earth’s core. A captivating blend of bleak gothic steampunk, swashbuckling old-time adventure and Lovecraftian horror watching from the fringes whilst breathing through its nose, but it all gels together excellently without seeming schizophrenic and becomes something really special for it.

Well, except for one embarrassingly out-of-place mission that has you brokering a peace between talking rats and guinea pigs. Yeah, it’s as silly and childish as it sounds. Considering that I’d just been trying to talk my men down from suicide and had been constantly avoiding unknowable horrors up to that point, coming up on a rejected screenplay for Stuart Little was about as tonally off-putting as arriving in the land of the Teletubbies. Not that it was poorly written, but it didn’t have a place in a game where you have an option that allows you to eat each other.

Another flaw that strikes Sunless Sea was also made fairly evident by that mission sequence – the incredibly frequent text dumps. As a student of Literature it’s probably wrong of me to say this, but there is such a thing as too much reading. In certain quests you can show up at a new location, all bent on danger and derring-do, only for a large book to be thrown bodily at your face and told you can’t have fun until you’ve done your homework. I’m sorry, I thought we were supposed to be having a chilling, thrilling adventure on the high seas, but you seem intent on making me read War And Peace. What happened to show-don’t-tell? I found myself skimming these enormous chunks of text before too long, what with so much of it being flowery prose. Again, it’s not badly written, there’s just too much of it in too densely-packed quantities. FTL remembered to keep its written stuff in short, punchy statements, and knew to let the visuals do a great deal of the talking. 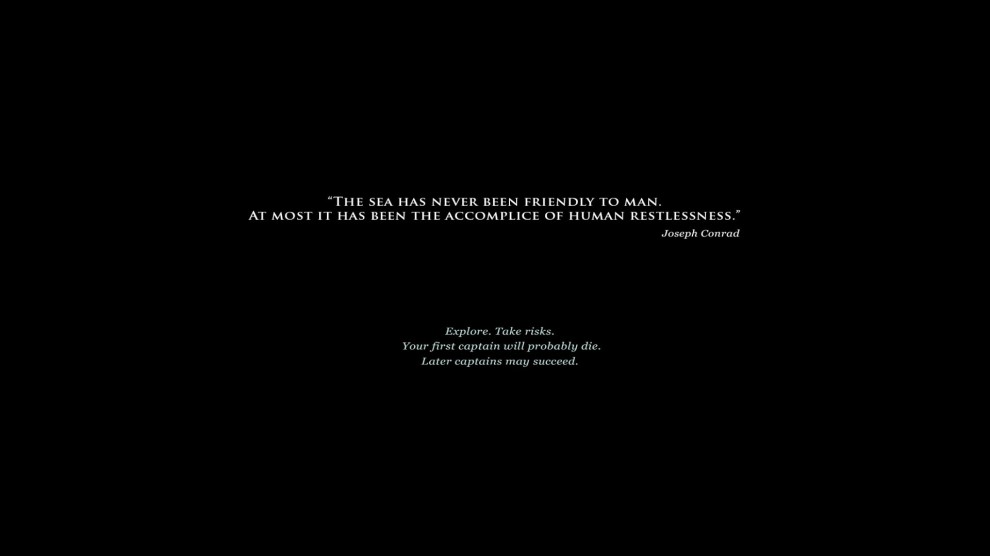 And there’s no reason why the same can’t happen here. The whole of The ‘Neath and its perilous “Unterzee,” they’re both realised in staggeringly gorgeous detail with beautifully rendered images. The people are pictorially charismatic, reminding me of Dishonored with their exaggerated features and a style that verges on cartoonish without ever becoming comic. The overhead images don’t lose any beauty for their being seen through a bird’s-eye-view, as you pass frosted fortresses, beautiful mansions, blood-splattered cathedrals, the forges of Hell and a hundred other captivating landscapes. They’re not just well-designed, they’re gorgeous in their portrayal and endlessly inventive. And whilst I don’t know enough about art to say whether a lot of these locations were hand painted or not, they certainly look good enough to give that impression and it comes down the same thing for the viewer. Add that to the haunting musical score, and you almost feel ready to start humming some mournful sea-shanty along with your despairing sailors. Well, what’s left of them.

But I realise now that I haven’t really talked about Sunless Sea’s mechanics in detail, and that’s because there isn’t really a huge amount to discuss, as it’s pretty minimal. Gameplay takes two forms, either pootling around in the water firing projectiles at bad guys (which you’d be wise to do as a last resort, as you’re generally pretty weedy) or sorting through text boxes looking for the best way to manage your money, resources and ever decreasing morale.

Get the lemon and mayonnaise, boys! If we survive, we eat well tonight!

And as you meander through the wordy stuff on land, you’ll frequently come across options that are closed to you, at which point you piss off to find whatever metaphorical key opens that metaphorical lock, in classic adventure-game style. So if Johnny Bignose wants a new set of handkerchiefs to replace his old ones, you’ve got to go out and find a set before he’ll give you the Sacred Cross Of Saint Kleenex, or whatever it is you need from him. And whilst this can be a little problematic with the labyrinthine map, they do tend to give you a general direction to go in. And even if they don’t, you could always go and do another mission instead and see if you come across those precious sneeze-rags along the way. After all, the world is your oyster. Well, maybe not an oyster. Perhaps one of those giant clams that grabs your leg and holds you underwater until you drown.

Sunless Sea could still use a bit of work, especially mechanically, but it’s genuinely gorgeous when it comes to the trademark sense of wonder and dread. You’ll always want to see what lies a little bit beyond the horizon, and a little bit further and further still, and then the world will suck you in before you know what’s happened. It should also get your attention if you like games that are happy to punish you for every little mistake; the calling card of the rogue-likes as well as don’t-take-no-nonsense titles like Dark Souls, Hotline Miami and Amnesia: The Dark Descent.

If you want something to do this weekend, lose yourself in Sunless Sea. Lose your money, your way, your crew, your mind and your life. Lose everything you have to the vast evil of the ‘Neath. It’ll all be worth it.

8/10
Though it suffers from an agonising lack of haste and a general lack of imagination in the mechanics, there’s very few video game worlds that are so deep, so creative, so atmospheric and dripping with personality.