Orcs! They’re like the P.E. teachers of the fantasy world; big, brutish and with the kind of intellect that makes you look for the nearest point of escape. Or maybe that’s just me.

Of course, when I say fantasy I mean Lord Of The Rings. You know, that one fantasy template, the one that everybody copies from when the idea bucket is running low and they just can’t be bothered any more. Why think up diverse and impressive worlds when you can just do what everyone else did and steal from the once-unique ideas of J.R.R. Tolkien?

The latest video game incarnation of Middle Earth to grab people was last year’s title, Middle Earth: Shadow Of Mordor. It’s a very good game, a mix of Arkham Asylum’s combat with Assassin’s Creed’s free-running, in which you waddle around Sauron’s backyard, sandbox style, frightening the orcs who live there and occasionally beheading them when you feel like it.

All of the above is a plus in my book, and though the story was basically forgettable, the game featured some interesting ideas. The one that stuck with people was the Nemesis System, perhaps one of the most innovative ideas for sandbox gameplay in years. Everybody I spoke to about it was certain that this would set the standard for these types of games, and I can understand why they’d think that.

See, whilst Mordor is flooded with your standard breed of orc, a few of them get to be captains, randomly generated and part of a tiered hierarchy into which they are inserted. Let me give you an example.

“These are awesome! Guys, come check out my new contact lenses!”

Let’s say you’re wandering through Middle Earth, picking your nose, and you get jumped by a gang of enemies. A random orc lands a fatal blow and suddenly he becomes a captain for having killed you, known as Flegmog The Bug-Eyed, or whatever. He gets put into the hierarchy at the lowest rank. A little later we hear reports that he’s been on a successful hunting trip, and has levelled up. He’s now more capable than before, but he’s still lowest rank.

Not for long. Flegmog has eyes on advancement, and thinks he might be able to take on his boss, Rabflib Headsmasher. Fleggy challenges him to a duel, and if he wins (something you can witness and even intervene in) he levels up again and also takes Rabflib’s place. One axe-swing later, he’s rank two, with the resources and power to match.

Meanwhile, this sort of thing is happening all over Mordor. Captains are competing, getting killed, getting promoted, getting trained. You can get involved at every stage, get invested and alter the events however you wish. If a captain you dislike is holding a feast, you can poison the grog to lower his standing or even kill him. Or, if you want to him advance, you can make sure that everything goes according to plan from the shadows and get him through the night, raising his standing with others of his kind.

This would all be good enough on its own, but later in the game you get the power to hypnotise and control orcs, including captains. This itself opens up a thousand new possibilities. Maybe you want the high warchief dead, but don’t fancy your chances in a direct fight.

No problem! Brainwash a lesser orc, make him become a captain and start working him up through the ranks, helping in his duels and the like. Finally, you can make him join the warchief’s entourage, at which point you telepathically suggest that he mash his leader to death with a hammer. If he wins then he’ll become the replacement warchief, a valuable asset considering that he’s still under your spell.

“And whilst you’re at it, can you put up some shelves in my living room?”

There’s other aspects I haven’t even mentioned, like how orcs have personal weaknesses and strengths to research and exploit, how they’ll remember details of previous encounters with you and even how some of them refuse to stay dead. At one point I threw a particularly fat orc onto a fire and watched him roast to death, before smugly walking away, action-hero style.

Unfortunately nobody had told fatso that this should have killed him, and as I was travelling later I suddenly heard a yell, and turned to see that Chubso Porkchewer had returned, albeit covered in horrible burns and screaming for revenge. He’d been training too, taking some effort to put down, but when I finally impaled him through the stomach and pushed him off my sword, I felt pretty good about myself.

Except that it didn’t work, and a few hours later my fat friend was back, his ample gut covered in bandages and promising that I wouldn’t get to stab him again. Bloody hell, forget Sauron. This psycho is the true villain of my game.

And I guess that’s the point, that it was specific to MY game. The whole thing was wonderfully organic, a real gem of an idea, and those I was talking to were insistent that this sort of thing was going to be seen more and more.

Don’t take the wrong impression, there’s nothing wrong at all with the Nemesis System. In fact, it’s pretty awesome and one of the most memorable creations in recent triple-A gaming. I just think that this is a one-time deal. Maybe we’ll see variations of it come back a couple of times in the next few years, but I’m not convinced it’ll revolutionise sandbox gaming as everybody was saying it would.

For a start, I can only imagine how jaw-droppingly expensive this was to make, not to mention how many man-hours had to go into it. Getting the algorithms right, creating enough physical and statistical traits to keep the orcs fresh (relatively speaking), testing these new ideas and recreating them through trial and error – the final cost must have been staggering, the kind of numbers that make Bill Gates shocked.

This really is one of those projects that can only be done well by major game developers who have the capital to back them up. Maybe you could get lesser versions done with lesser budgets, but it’ll get old fast. Basically, this was one hell of a commitment and not something you can just drop into a game if you feel like it afterwards. This is something you had to work at, something you had to invest massive amounts of time and effort into creating. I don’t see many developers doing that, knowing that it won’t be as exciting the second time.

Not to mention that it’s hard to think of a game that would suit this system better. Somebody suggested a crime sandbox like GTA, with a structured system of Mafia goons, but I don’t think it would be as good without some serious changes. It seemed to me like Shadow Of Mordor was designed from the ground up with these ideas in mind, which is why it worked so well. Your own deaths are part of this cycle, your hypnosis powers are a fundamental aspect, two dynamics that could only be applied with a very particular type of story. One of the reasons that the Nemesis System was so effective was that it fit the concept like a glove, to the extent where I almost wonder if they came up with the mechanics first and made a game to fill the gaps around it.

It won’t apply so well in other games with different stories, not without some major restructuring, and even then people will see through it. They’ll look at these ideas and say “oh, it’s like Shadow Of Mordor – but less tightly designed and without all the options of the original. Better luck next time.” 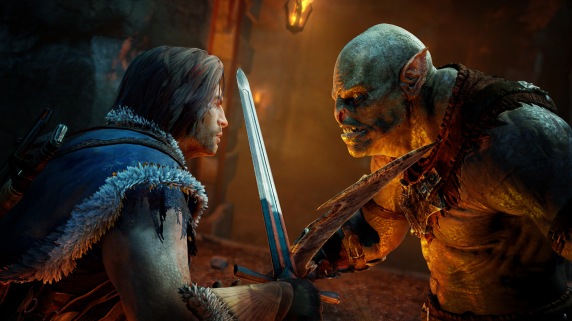 “Oh, god! <cough, cough> Right, the second I brainwash you, I’m making you eat a whole crate of breathmints.”

That’s not to say people won’t try. If there’s ever a sequel to this game then I expect that it’ll have a similar thing, because people will expect it. And maybe a few other publishers will try to unsuccessfully imitate the process without understanding the subtleties, but it won’t take long for it to sink in that this is a faithful hound, one that can’t be given to a new owner without biting them quite badly.

The Nemesis System will, in that case, remain a brief firework, something that shone all the brighter for its inevitable disappearance. And that’s OK, there’s nothing wrong with that. It’s still a great game that people will remember for a long time. It would be nice if some other game managed to improve on it, but I don’t think it’ll happen. It’s fine already, and it’s OK to leave it alone now.

Think about it. Would Fawlty Towers have been improved with another season? Would Hamlet have needed a spin-off? Would Bioshock have needed a direct seque- Oh.

Well, I guess that proves it, then.