Spoilers! Big, bouncing spoilers for Arkham Knight up ahead! If you haven’t played the game yet, or if you don’t want anything ruined for you, go read another article now. Seriously, we’re dealing with the big one here.

Alright, this time it’s another bit on how the most recent Batman game failed my expectations, and I realise that I’m sounding pretty down on a game that was actually really good. There were only two major problems with it: the quality of the PC release, and the identity of the Arkham Knight himself.

For those of you who haven’t been following the news, the Arkham Knight was a character invented for this game by Rocksteady themselves, a sort of evil reflection of Batman who wears an Iron Man-style suit with a vague militaristic theme, and has some sort of grudge against Bats himself. A key part of the main story is the big question, “Who is the Arkham Knight,” and sure enough we find out about this mystery figure in the final third of the game.

You want to know who it is? You sure? Last chance to back out.

Alright, it’s Jason Todd. And suddenly the history of Batman has to be repeated because most people won’t know who the hell that is.

Basically, there have been three people who have held the position of Robin. The first one was Dick Grayson, an acrobat who had his family murdered or something. He went on to become Nightwing, probably because people kept making fun of the Robin costume and Batman was being the joyless that prat he is.

Then we had Jason Todd, who gets killed by the Joker (except that he didn’t), and he was a bit violent and kind of a wanker. No great loss there, I think. There’s something kind of embarrassing about a snot-nosed brat acting like the Punisher and trying to be all gritty and dark. Oh, shut up, training bra. Go watch Scooby-Doo and we’ll let you play with the big boys if you’re very good.

And now we have Tim Drake, who pretty much got the job because he briefly met Grayson one time and managed to work out who Batman was. Sounds like a circuitous route, but I guess Starbucks wasn’t hiring.

Anyway, Todd is back. I mean, he’s around in the comics too, as the vigilante Red Hood, but this is set before that, and Todd is revealed to have been secretly left alive. He’s imprisoned in an unused wing of Arkham Asylum, tortured by the Joker and made to hate Batman, whom he thought had abandoned him. After burning letters into his face and generally having a good time hitting him with anything he could find, Joker then sets him lose, whereupon little Jason spends several years training his own army and getting billions of dollars. No, I don’t know where he got the cash, put your hand down.

Anyway, Jason returns in a mech suit, calls himself the Arkham Knight and sets up a big plan with his new buddy Scarecrow to torment Gotham for some contrived reason I couldn’t quite work out, all so that he can kill Batman.

Wait, can’t you just go and beat him up? Jason seems pretty reluctant to get involved with Scarecrow’s plan at all, and keeps breaking away from the schedule in order to go kill Bruce Wayne. There also doesn’t seem to be any reason to hide his identity, but he does anyway. Surely knowing that his old sidekick is trying to kill him would hurt Batman more? For a guy who’s spent years working out his revenge, he’s missed some rather obvious points. Or maybe he just read the script and knew how to pace the story.

I’ll be honest, I’m not impressed with this reveal, for a number of reasons. First of all, Todd had no presence in the games up until this point. He wasn’t mentioned until this instalment, having basically been considered ancient history until now. When he was brought up in an off-handed way it became immediately clear that he was the Knight, to the extent where I wondered if they were trying to bluff me. It seemed a little too obvious, you know what I mean? Surely Rocksteady can write a better set-up than this?

No, it turns out that they can’t, but there’s other stuff that’s iffy too.

The developers claimed that the Arkham Knight was a completely original character, for one thing. And whilst the design of the suit is certainly new, I think it was a little cheap to say he’s a fresh concept when the guy inside the costume has been around since 1983. I guess if you stretch the logic somewhat then it’s not quite a lie, but I still think it’s also not the truth. If I wear Groucho Marx glasses and a fez, it’s not quite right to say that I’m an entirely new citizen. Maybe they’re playing on the dual-identity of the character and we’re supposed to view him as a new man, but I don’t care much for these metaphorical shenanigans.

The problem was that among die-hard fans, Todd was a very early suspect and considered one of the most likely entities to be dwelling behind the helmet. And whilst I understand the writers trying to lure us away from the reality by stating that it’s a fresh concept, it ends up diminishing the reveal of the character.

See, we like to have all the clues to hand when we look at a mystery. We want a fair examination of the facts, so that we can grin at the eventual revelation and see how every fitted together. But giving false information… Well, that’s just cheating. Especially if it’s fake info given in an actual interview, and not in the game itself – that’s sacred ground, isn’t it? You can’t just trick the fans before we’ve even bought the game, we’re assuming that everything said to the press has been honest. I don’t think we should have to study your PR campaign to work out when you’ve been sniggering behind your hand or not.

The other thing that made it eye-rollingly obvious was that part of the pre-order DLC for Arkham Knight was the “Red Hood” pack. As mentioned before, Red Hood is the title that Jason takes when he returns from the dead, and this just made his presence even more likely. It would have been like Darth Vader wearing a “world’s best dad” barbeque apron in The Empire Strikes Back.

The end result of all this was a vague sense of disappointment and frustration from the fans who’d been engaged in the mystery. To those who didn’t know the comic lore, it seemed like Todd had been thrown in at the last minute to fill the gap. To those who were aware of the history, it confirmed one of the first suspicions they’d had and came across as too easy.

I wasn’t impressed either, not least because I could think of several characters who could’ve worked as the Arkham Knight without disappointment. My personal preference was Barbara Gordon, aka The Oracle, aka Batgirl, who I think would’ve been almost perfect, if they’d just tweaked a few details.

Think about it. The Arkham Knight is only assumed to be male because of that voice distortion gizmo he’s got in his helmet. Imagine the reveal, hearing that electronic growl slowly revert to the calm, younger voice of the Oracle, and seeing Batman’s face turn to shock as he realises he’s been betrayed. She also has the motivation, losing the use of her legs because Batman let the Joker live one too many times, a disability that the Arkham Knight suit could have been built to cancel out. Another possible twist that would have made sense. 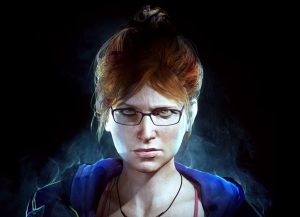 You might have everybody else fooled, but I’ve got my eye on you…

Like the Knight, she’s a technical genius with an intimate knowledge of Bruce Wayne and access to money and resources – Bruce’s money and resources, more specifically. It would’ve been a chilling moment for him to return to the Clock Tower and discover pieces of his old suits had been combined and altered to make this new one. On top of which, remember that all the information he obtains about this new foe comes from her. It would be fun to watch him get lured around by this cuckoo in the nest, feeding him a false trail of breadcrumbs.

There’s other good reasons why it should have been Barbara. She’s had a strong presence in all the games, so the impact would have been at its highest, unlike Todd who meant little to the series. Her death is faked halfway through the story, so she would’ve had free reign to orchestrate her plans as the Knight from that point on, and she’s had a lifetime of practicing acrobatics and combat as Batgirl. It was almost a perfect match.

I do think this would’ve been the better option. Admittedly, it still wouldn’t fit with the “entirely new character” smokescreen that Rocksteady threw up, but I think we’ve just got to put that one to the side for now. Exactly what original characters could’ve been in there, Quincy Sharp? That pudgy old man wouldn’t have been very impressive to watch, not to the mention the fact that I wouldn’t have cared at all if it had been. No, it had to be an established character so that they could have some emotional weight. It’s just a shame that the writers couldn’t admit it to our face.

Despite all of this, Batman: Arkham Knight is still a great game and worth your time. Just not on the PC. By the way, how’s that coming?