Oh, thank god. Just when Steam Early Access and Kickstarter seems to be all but dead in the water, some brave developer has the ovaries to stand up and make a solid game that’s worth playing on its own terms, briefly reinvigorating hope in both of those rather sickly systems. Ooh, and it’s a game inspired by Dungeons And Dragons, with rogue-like elements, a sexy-voiced narrator, and the “reaction brawler” combat system (still determined to get that phrase off the ground) from older works like Arkham Asylum, Sleeping Dogs, Shadow Of Mordor, Mad Max and Assassin’s Creed, sort of.

What a mission statement! Defiant Developers, have you been looking at my Christmas list? All you need to do is add jetpacks and Cadbury chocolate, and I’ll be so happy that I’ll practically be ready for the post-coitus cigarette. This “Hand Of Fate” game does seem a little too good to be true, and sadly, it kind of is. Don’t get me wrong, it’s a good game that’s worth playing, but when I think about what it could’ve been, I do get a little bit of the petit mort to go along with that aforementioned smoke.

Look at that. A French joke, a sex joke, and a joke that only about ten percent of the audience will get, all in one go. And my careers advisor said I’d never amount to anything. Ha!

So Hand Of Fate (not to be confused with hand of eight, a little-known trick for cheating in poker), came out properly at the beginning of last year, having been first seen at the 2013 GDC in a basic demo form. There was a Kickstarter campaign, a variety of stages involved, a lot of stuff that most of you don’t care about at this point, and now it’s available on all the platforms that matter. Sorry Wii U, you’ll have to sit down again. This is what you get for insisting on that silly controller.

Anyway, Hand Of Fate is playing with a decent premise that I’m surprised I hadn’t seen done sooner. The basic idea is that you’re playing a combination of fantasy Yu-Gi-Oh and the Munchkin games with an old man who lives in a Dark Souls cathedral. He draws random cards that you have to deal with the consequences of, managing food, health and gold as you move from one end of the table to the other. Except that when he flips a trap card to summon half a dozen skeletons, you get sucked into the flavour text to actually fight them, in real-time combat in that “reaction brawler” (REMEMBER IT) style we alluded to earlier. Any damage or penalties you take whilst cracking skulls carries over back into the card game, where you look for ways to cancel them out, or at least compensate with the discovery of a stonkingly big sword. 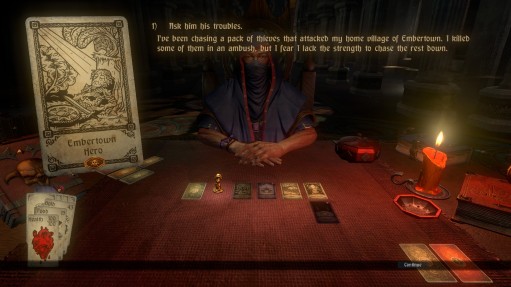 “You enter a tavern. Roll a sixteen or above not to submit to the cliches.”

But because the Dealer is drawing from a randomly shuffled deck, you’re unlikely to get the same game twice, and this is where I could understand people getting turned off by Hand Of Fate. Like many rogue-likes, luck plays a disturbingly big part of this, and there’s every chance that even the smartest of players could get a run of bum cards, and end up getting curb-stomped by a gang of irascible minotaurs, without having made the poor decisions to justify it happening.

But the opposite holds true too. Keep playing, and you’ll suddenly find yourself in one of those matches where everything just lines up perfectly, as expensive loot falls into your lap and all the battles are against one guy with a blunt toothpick. You’ll wonder how you ever failed, at least until things go gruesome again.

And that’s kind of the point, as it is with all games of this stripe and genre. You’re not expected to win every time, it’s about the challenge, the variety, and the minimal progress made, even in failure. See, even when you lose you can unlock cards for subsequent playthroughs by managing to fulfil certain criteria on the cards you already have. Draw a card that demands you fight Kleztorol the fat goblin, and tearing his head off will earn you the “treasure of burger mountain” card for the next time you play, which may shower you with weapons and American cheese as a reward. And even when cards suck, the game is rich enough with its language and narration that finding new ones at all is an enjoyable experience.

In fact, if I have a problem with Hand Of Fate, it’s that it’s not hard enough. I assumed that this game would have a certain level of challenge, something that’s demanded by the rogue-like genre to ensure an extensive playtime, but I breezed through half the campaign before I finally died to a determined band of velociraptors with shield and axes. The game gets some genuine teeth in the final quarter, loading you with so many curses and penalties that you can barely move to avoid the attacks of the armies that descend on you, but it’s a little too sudden and feels less like a justified challenge. It’s more akin to Defiant Developers just hamstringing you for being too MLG, like the incestuous guy from Gladiator backstabbing Russell Crowe before they fight.

“What could go wrooooong!”

I also wonder if it’s a little lacking in ideas. The combat mechanics are sound enough, if somewhat simple and without nuance, but they’re screaming for something more to substantiate them, to back them up, especially when one mission allows you to run around a trap-filled maze, looking for loose change and free gear. It felt like playing the underdeveloped foundational point of a whole new branch of stuff to do. And whilst the tactical card games are fun, it feels more like a framework for gameplay than gameplay itself.

Not to mention that Hand Of Fate is also a little rough around the edges in general. The combat arenas are restrictive and often have annoying traps concealed in them, the graphics are somewhat patchy whenever you’re not at the card table, and the game suffers from the occasional glitch, such as freezing your character in place for a moment. But that said, it’s never anything really awful, and it’s no more frequent than most AAA games I’ve tried, so I can’t really get mad at it for that.

And I couldn’t end the review without giving a personal shout-out to Anthony Skordi, who as mentioned previously is chewing some spectacular scenery as the eternally-present Dealer, with a voice that manages to be more commanding than a whole herd of military officers combined. Skordi is given the substantial job of being the man who’s got to hold the tone of the game together, and does it superbly as the ornery but threatening figure watching you with narrowed eyes and calculating mind. He’s playing it somewhere between a bad-tempered headteacher, Christoper Lee’s Saruman, and the archetypal mystic who lives on the edge of every fictional carnival ever written. He’s clearly having a whale of a time playing this conceptual chimera, and consequently so does the player.

Yes, I thought of a Borderlands joke too. What makes you so damn special?

Basically, Hand Of Fate is a good game, but it could’ve been a lot better, probably lacking the money or imagination to make the most of its potential. But there’s certainly enough here to be going on with. There’s an endless mode for when you just want to play and earn cards, providing many hours of gameplay, and Defiant have been good enough sports to give out DLC card packs for free. See that, Blizzard? This little company has made a fraction of Overwatch’s capital, and they still had the guts to give out free content without resorting to cheap microtransactions. Tsk, tsk.

Speaking honestly? Give Hand Of Fate a go. It’s flawed, but it’s also a bold, clever little game that wasn’t afraid to take risks in the name of being above the rest of the stock. That’s worthy of a good review, and I hope Defiant keep that attitude up. I’ll be following their future work closely from now on.

Working with less than the big boys does show here, but it’s somewhat offset in comparison to a good concept, a sense of real heart, and a voice narration that’s the best I’ve heard since The Stanley Parable.