When I heard the announcement of Bloodborne, I didn’t think it was going to be a hard sell. Here’s Dark Souls, the game that people love, but now with antique pistols, lovecraftian ickiness and grimy steampunk elements. Blimey, I think the Internet just crapped itself in excitement. What’s that? You can’t wait for it to be on the PC? No, don’t pay attention to that, look at the new boss monsters and original environment design.

The fact that Bloodborne was a PS4 exclusive was always a little concerning, not least because it put those of us without such consoles in an awkward position. After all, the better Bloodborne sounded, the more we’d be forced to resent Sony for hogging it to themselves. I don’t appreciate this, Sony. I know I recently waxed lyrical on the beauty of the PlayStation 2, but I don’t like having to take back all that credit when you refuse to share the better games, especially those that would normally be multi-platform releases, snarl, grr, snap.

And now I do have to resent Sony, quite a lot, in fact. Why? Because Bloodborne is everything I was hoping for. As mentioned, the fact that my flatmate recently got a PS4 means that a lot of exclusives I never got to try were suddenly open to me, and it wasn’t like I was hankering to try out The Order 1886. I had better ways to spend my lunch hour, thank you very much. 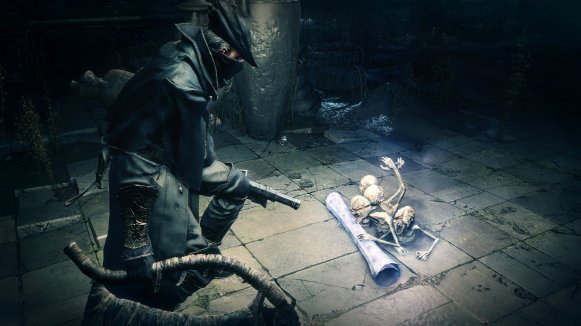 The postal service has certainly suffered in recent years. They’ve had to resort to midget skeleton witchcraft.

So let’s be clear here: if you didn’t like Dark Souls, you probably won’t like this. It’s the same basic set-up, with stamina management melee combat, all the enemies resurrecting when you die, and the kind of difficulty that makes grown men suffer a brain aneurysm. And it seems that From Software have decided that DS1’s barrier to entry wasn’t vicious enough, and ramped up the initial stakes beyond belief. The Undead Berg looks like a basket of puppies compared to the lethal labyrinth that is Central Yharnam, filled with cockney arseholes wielding scythes and sporting irresponsibly large hats. Perhaps it wouldn’t be so cruel if the average distance between checkpoints wasn’t measurable in light-years, or the fact that the game won’t even let you level up until you either win a boss fight or find a hidden item eighty miles in.

But none of that’s bad, it’s what makes these games… Fun? Compelling? Certainly satisfying in a way that few things are. I beat the first boss by the skin of my teeth, and had the kind of adrenaline boost that can only be matched by five hours of professional tiger wrestling. The sheer level of challenge is so utterly unforgiving that when you do succeed it feels like you could take on the world, and that’s a genuinely rewarding experience.

And From Software clearly decided that if you push up the sense of danger then that feeling will be all the more impactful. The constant ambushes keep you in a permanent state of paranoia, enemies patrol around more than they did before in a way that makes them scarily unpredictable, and to top it off they took away my best friend from the previous games – that irreplaceable sweetheart, the shield.

Not that it doesn’t make sense for them to do that. The focus of combat has changed subtly but in a very important way. In the older games you were always on the defence, rolling around and smacking away any attack that came too close, looking for that moment to strike without getting pulverised into processed ham. But now there’s no shield, no parry, nothing to keep you safe. Instead, you’ve been given a gun in your off-hand and told to go nuts. Oh, bless you, From Software. How could I ever doubt you for a second?

“I borrowed this gun from a cancelled Fable game. What? Too soon?”

Basically, players need to go berserk, as it’s probably the best way to stay alive. Stun-lock your enemies with flurries of blows, interrupt their attacks, and if you get damaged, hurting an enemy in the brief section of time afterwards allows you to regain that lost health. So yes, you’ve got to get angry to get through. A wonderful take on a familiar combat system that’s perhaps even better than the original, as nothing feeds panic than letting instinct take over.

Perhaps to match this emphasis on a single style of play, there’s a little less variation in the weapons and armour now. Some might think that it’s restricting but I consider it more focused, more tightly designed. It doesn’t hurt that every weapon is actually two, considering you can make nearly everything snap between two wildly-different forms at the press of a button. I’d like to give a personal shout-out to my gentleman’s cane (no innuendo intended), which could turn into an Ivy-approved whip with a single flick of my cuff linked-wrist. 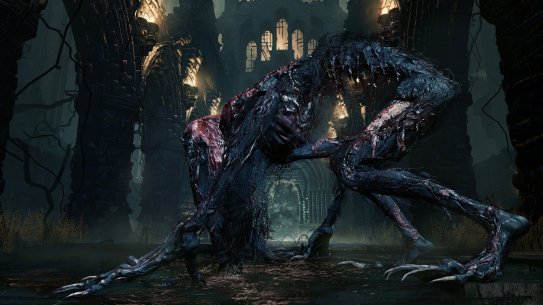 This is what happens when a… No, I got nothing. I’m not even sure what I’m looking at. Is it an old roast chicken? A zombie gorilla? The portrait in Jennifer Aniston’s attic that ages instead of her?

Yet where one scale goes up, another must go down, and Bloodborne suffers from being a little monotone in appearance and a little less varied than its forefathers. Admittedly the environment design is beautiful, with Victorian architecture and gothic imagery overlaid with a wet, sickly aesthetic, like the very country itself managed to contract some awful plague. The problem is that the whole place seems a little less varied in style than the older games. There are basically three types of location now – Jack The Ripper’s favourite network of alleys and Escher-like stair systems, looming cathedrals and mansions built for somebody about fifteen feet tall, and murky swamps with Eldritch mist hanging low on the water. All very prettily designed and enjoyable, but in comparison to the diverse locations and concepts in the Dark Souls games it is a slight step back. Still ahead of most games, but nonetheless – a step back.

But the story is as dense as before, which is certainly nice. Earlier today I killed a fat spider with baby fuzz hair, and still can’t say why it wanted to eat me, why it couldn’t get a barber and who decided to give it iceman powers. I’m looking forward to finding out why though, not mention why the main city has been overrun by hordes of beard enthusiasts and rejects from Battersea Dog’s Home. The monster design, perhaps better than ever, feeds the theme of corruption by lining up distorted versions of beasts we know already, whether it’s crooked humanoid figures or wet-feathered crows dragging themselves across the ground towards us.

And this is all good, because it makes the experience of banging your head on the wall not only tolerable, but pleasurable. Curiosity is the driving force that keeps us going when the stress of being murdered yet again threatens to become too much, and it more than makes up for it. A world of flat, grey corridors would lose appeal fast, no matter how detailed, but Bloodborne knows that discovery is just as important as victory and tarts itself up to compensate, proving that graphic design is still more important than graphical quality.

There are a couple of things I feel let it down, though. The loading times are pretty shoddy, especially when fast travelling now requires you to warp back to the hubworld and then set your destination from there, which brings us all the excitement of having to pull over for a Little Chef toilet break on the way to the beach. I also think that whilst tightening the focus of equipment was smart, there aren’t enough bits of gear to go round now. Enjoy the weapons and clothes you find yourself suited to, because you’ll be using them for quite a while before anything better shows up. 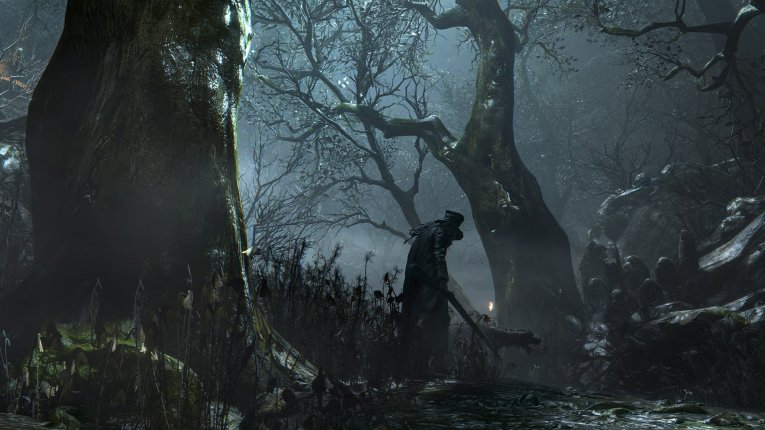 Oh, bugger. I guess I should’ve been dropping those breadcrumbs instead of eating them, huh?

But on the whole I was rather delighted with Bloodborne. A change in direction is what keeps things fresh, which is rather ironic considering how everything in this game looks it’s been decaying for six months and nobody told it to stop moving. Admittedly I think it’s time for From Software to do something new, to put this and Dark Souls on the backburner for a time and try something completely different, but the danger and delights of Yharnam prove that this concept has still got blood in its veins – now go out and spill some.

From Software deliver again with a superb spin on a now accepted formula. Bloodborne mixes the mould of survival horror with the fire of the hack-and-slash RPG, and becomes something excellent because of it.