So let’s take note. Last time we did a review, it was about an indie game with bullet-hell elements primarily available on Steam, focusing around the traumatic experiences of a small child. The time before that it was a gruesome action game from 2014 that turned out to be a lot deeper and more thoughtful than a person might think at first glance.

So now we’ve split the difference and decided to take a look at The Binding Of Isaac: Rebirth. It’s a pretty timely choice considering the first DLC pack, “Afterbirth,” has just been released to the public, in the way that one releases a bear into a primary school and sits back to observe the results.

Rebirth was released in November last year as a remake of the original indie title; “The Binding Of Isaac” in 2011, and it’s not an easy game to summarise. Perhaps “Rogue Legacy” by way of a mental asylum? “Nuclear Throne” in your crazy aunt’s cellar? “Don’t Starve” in the brain of a Westboro Baptist Church member? 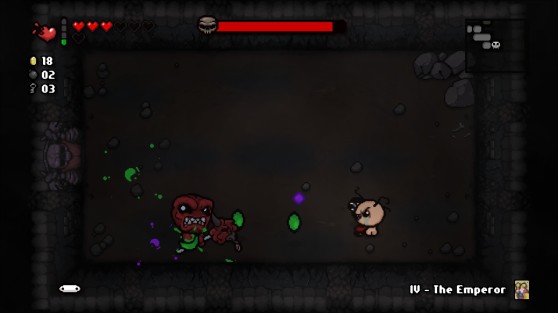 Jesus, where to begin?

Actually this is harder than I thought, because before we can compare The Binding Of Isaac to anything, we have to say exactly what it’s about, and that’s not easy. It was made by a guy named Edmund McMillen and may say an uncomfortable amount about his psychological profile. At least that’s what I find myself thinking as I watch the little lightbulb-shaped protagonist weep at a misshapen monster, in the hope that it’ll go away and leave him to wallow in his own excrement.

On the surface, it’s a story about a child trying to escape his home, clearly inspired by the biblical story of Abraham and maybe a few bad acid trips as well. The rather minimalist but engaging intro sequence shows the infant boy Isaac living a peaceful life with his bloated mother, who spends all day watching evangelists on TV and growing increasingly enthralled by their nonsense. When she starts hearing voices from god telling her to take away Isaac’s toys and lock him in his room, things get increasingly crappy for her beleaguered son, and when she finally gets the order to kill him, Isaac decides that he’s not going to hang around much longer and escapes into the basement. A basement that has been locked from the outside and covered up so people won’t find it, but I’m sure that’s no big deal, right?

And there’s the framework for the gameplay, a procedurally-generated set of labyrinths set beneath Isaac’s house, all filled with hordes of ugly enemies. Rebirth stitches some pre-made rooms together, dumps you in one of them and tells you to find the boss monster that’s sitting on the hatch leading down to the next level. Your goal is get as far down as you can and hopefully find an escape. Good luck with that.

The actual style of the game is a “rogue-like” top-down bullet-hell shooter, the kind that would’ve been played with two-separate joysticks in an arcade. You make Isaac beetle around rooms with WASD and shoot in various directions with the arrow keys. Hit E to drop bombs, SPACE and Q to use special items that you’ve picked up and – hey presto! You now know everything you need to know to play. It’s really that simple.

And I’m not degrading it for that. Simple isn’t a bad thing, not always, and Rebirth has perfected the school of “Easy to learn, difficult to master,” with some of the deeper levels being more deadly than a holiday in Syria but always rewarding the player for skill and competence. 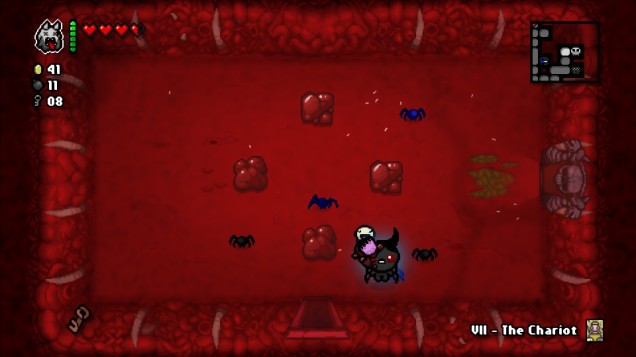 There’s also a staggering number of special items, some of which are triggered at will by the aforementioned player, but others just adjust Isaac’s appearance and stats permanently with no way to undo them. And considering they refuse to describe themselves or what effect they have until after you take them, poor little Isaac could end up quite a bit different to how you’d prefer.

I actually like this quite a lot. It does sometimes come with nasty surprises, such as taking an item that’s completely detrimental to your playstyle and only finding out AFTER it’s glued to your character, but there’s certainly enough pick-ups to make for a fresh experience each time and they’re diverse enough that they don’t get old.

It’s the aesthetic flavour that makes the game special, though. Rebirth is a game about coming face to face with the worst elements of humanity, mythology and psychology, and they’re reflected in a combination of monsters, objects and concepts that all meld together surprisingly well, in a style I can’t help but think of as “Horror-Lite.” Horrible, yes, but presented in a way that takes the edge off just enough not to seem genuinely harrowing. On the surface it looks like a crude game about killing monsters with literal blood, sweat and tears, not to mention urine and shit, but it’s actually a lot deeper and a lot darker than that.

You see, I’m not convinced that the basement isn’t just meant to be a metaphor for Isaac’s damaged psyche. Aside from the fact that the rooms get more surreal and disgusting as you descend through them, there’s a lot of imagery that feels like it was based on a perversion of a healthy child’s mind, as well as monsters that seem like misunderstood interpretations of religious figures and poorly-explained concepts. Isaac fights sentient poo, the four horseman, mutated spiders, angry sperm, the devil made flesh, huge tapeworms, the trickster god Loki, an impossibly large version of his own mother and about a hundred variations of himself, all twisted and deformed in some way, as though Isaac was wracked with self-loathing and felt the need to destroy himself by proxy. 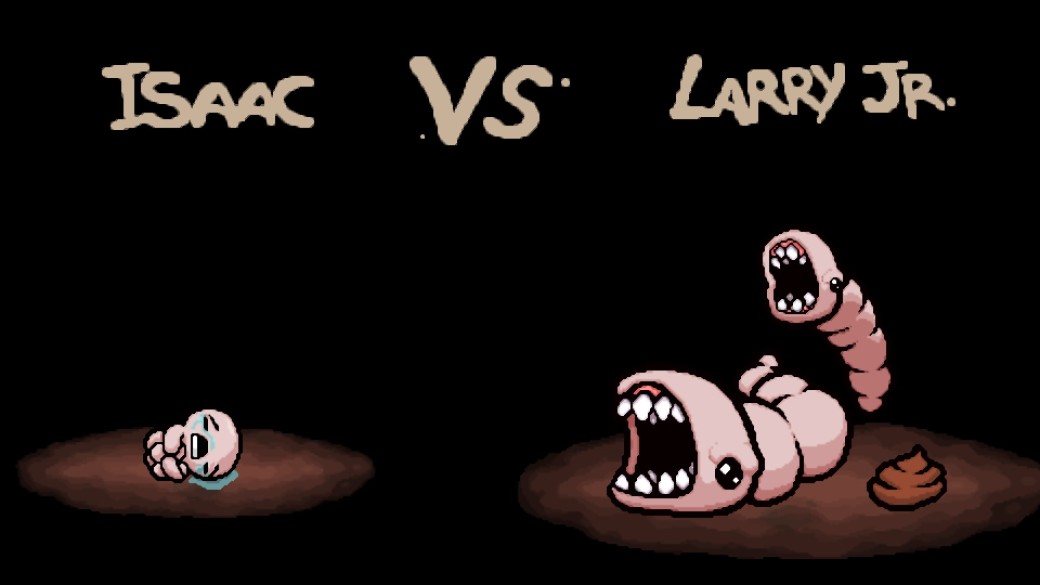 …VS Marvel VS Capcom VS Mortal Kombat VS DC…

By the way, everything you’re capable of follows these disturbing themes too. Isaac attacks enemies by blinking tears at them (more effective than you think) and most of the items you find are suggestive of some traumatic experience that he’s adapted into something useful. For example, wooden spoons and belts make him run faster. I hope I don’t have to explain it any more than that.

But on the other hand, it’s the items that are probably Rebirth’s biggest weakness. The diversity, creativity and sheer bloody number of them is good, but some of them are fairly inconsistent with the game’s themes and it becomes slightly annoying to see something obviously out of place, when everything else has been maintaining the dour, ghastly atmosphere so well. I don’t see how a reference to a sub-par internet video meme about firing lasers from your mouth relates to a game about the darkness in the human heart and the dangers of a highly religious upbringing. Or is it just me?

Maybe that’s a bit nitpicky as criticisms go, but this one isn’t – the game needs to be balanced better. You unlock more characters with different stats and abilities as you go, as well as new items, and some of them are frighteningly effective when combined. Sticking a severed cat’s head in the hand of the “Azazel” character will promptly make you the most powerful thing since Robocop took up jedi training, to the extent where a person with no real talent could breeze through the toughest levels and take down most bosses in a single attack. 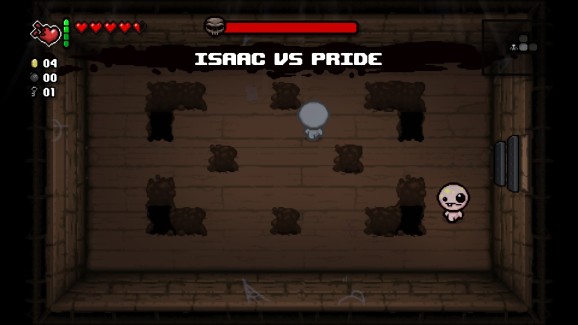 Who would’ve thought that child abuse and religious dogmatism could’ve turned out so poorly? At this rate, the only jobs Isaac will be qualified for are going to be child pageantry and wearing sandwich boards with “THE END IS NIGH” written on them.

I’m also not sold on the fact that now I’ve completed the game a fair few times, there doesn’t seem to be anything to strive for. Admittedly, it’s designed to be played over and over again, but to begin with that made more sense, as more items and characters were unlocked each time for subsequent playthroughs in classic “rogue-like” style. But now I’ve got the majority of everything there doesn’t seem to be much more to do. Don’t get me wrong, I’ve enjoyed what there was and it’s taken me a long time to do so, but the prospect of being made to repeat it over and over ad infinitum only makes me wonder how long that can really be entertaining. It’s the curse of multiplayer brought through to singleplayer.

Of course, I could buy the new Afterbirth DLC, which promises to have much, much more of all of this stuff. And I probably will, because The Binding Of Isaac: Rebirth is a very good game. It’s challenging, unique and manages to tread the delicate line between fascinating horror and repulsive horror perfectly. It also manages the clever task of taking a core set of mechanics and pushing their limitations, whilst still staying loyal to the basic format.

Yes, maybe it’s crazy, but it’s my kind of crazy, so drop your pants, tear up your bible and make burbling noises with your lips as you join me down here in the basement.

At least you won’t be lonely.

Some experiences are unique enough to be worth trying for that reason alone, and Rebirth is certainly one of those. On top of which, it’s also well-designed with an excellent difficulty curve and a bucketload of material that should delay the inevitable sense of repetition for a good, long time.