I’ve decided that I’m not going to buy any game that has zombies in without looking for some fresh take on it first. I’m bloody sick of zombies, but the little green bastards keep coming back to maintain that the thermometer of story quality is stuck firmly at room temperature, and I’ve just lost any interest.

Let’s be fair though, they’re not limited to games. The undead have shambled their way through just about every artistic medium going, and it looks like they’re here to stay, but they’re always so much more omnipresent in gaming narrative.

I think that his can be partly put down to the fact that there is something inherently cathartic about smashing corpses around. Games designers worked out the formula a while ago, and it’s only been refined since then. Unfortunately, you can only refine something so much before it can’t change any more, and that seems to be the state we’re in now. Dying Light, a game that annoyed me so much that I wrote an entire article shouting at it, teased us with a new take on managing the walking dead and turned out to be bluffing us spectacularly. Thanks for that, Techland.

The fact that “zombie apocalypse” is a tired concept is well-established, but they keep showing up regardless and I think I know why. They tick enough boxes in a variety of checklists that you can basically insert them into anything, fulfil nearly any niche. Visceral B-movie action? Done, that’s your House Of The Dead and Dead Rising games. Frantic terror and desperate fighting for survival? Left 4 Dead and Call Of Duty: Nazi Zombies steps in to help. Developed character arcs? We turn to The Walking Dead and The Last Of Us for that one.

Even when zombies aren’t the central focus, they keep shoving their decaying noses into anything that has room to spare, like the sauce from baked beans pooling around the other items in your fried breakfast. Skyrim, Fallout, Crackdown 2, Half-Life, Prototype, Minecraft, Borderlands, Red Dead Redemption, Dishonored, and Mass Effect, just to name a few. Hell, you can probably think of several games I’ve missed already. It’s unending (which is appropriate really), but it does get old. It has gotten old. So why do they keep doing it? Well, I think one of the major factors is that they relate to the player in so many different ways without us even realising it. The biggest factor, of course, is that there’s no reason not to kill them, ever.

You see, zombies do indeed look like the human beings they came from, but not quite enough to unnerve us, so there’s not usually enough humanity present in them to freak us out unless the designers intend it otherwise. That way we can blow them to bits without feeling like we’re perpetrating some sort of mass murder spree, and secretly vent some much needed frustration. 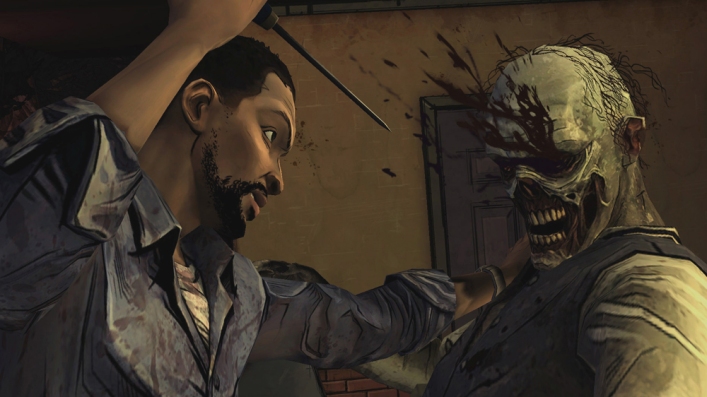 What world is this, where watching a man kill a reanimated corpse with only the tools to hand is considered mundane?

The fact is that whilst they’re clearly inhuman monstrosities, they do look a little like people, just enough, and I suspect that a lot of surplus aggression can get worked out by beating an almost-person to death with a sledgehammer. They occupy that perfect middle-ground between man and monster. The conscious mind doesn’t see a human being, but the subconscious is delighted and is egging you on to keep thwacking that guy who suddenly looks a lot like that moron who bullied you at school… Hey, don’t judge me, it’s not creepy! He’s a zombie, it doesn’t matter if I splatter him to bits. I could turn him to red paste and it wouldn’t be any less moral than playing Cooking Mama.

Actually, it practically goes the other way. Killing the undead seems almost like a moral imperative in the vast majority of stories, what with all that mercy-killing and so on. All these games and books seem to suggest that being an undead is some horrible experience for the resurrected chap in question, so when you finally put him out of his misery with a landmine hidden in a raw steak, you’re actually doing him a solid and he’s going to high-five you in the afterlife. Not only that, but all these stumbling monsters will immediately kill anybody if they get the chance, so you’re kind of pre-emptively saving a life, right?

That’s a stroke of genius, I’ll admit that. An enemy who is so morally uncomplicated that there is no justification for not killing them, no matter who they were in a previous life. I can’t think of many classic villains who fit that need so well. Actually, I can’t think of any. Even Nazis have lederhosen-wearing family somewhere, but zombies? Fuck those chomping psychos. Go get your loudest shotgun and your rustiest chainsaw, and let’s make the world a better place.

Which brings us to combat. It seems to be a well-established fact that the risen dead are made by the lowest bidder, hence several exploitable design flaws. For example, the cranium. A zombie does not get a fractured skull, or a cut on the temple, or even a broken nose. No, the second any impact touches upon a zombie’s head, then BOOM! The whole thing explodes like some enormous pimple, showering those nearby with blood and brains, but the kind that will wash off before the next scene, so that’s alright. Then what’s left is a severed neck stump spraying a pathetic jet of blood, before the body comically topples over and we get fifty experience points.

There’s something guiltily satisfying about this, no matter what the context. It’s the absolute embodiment of human destruction to obliterate someone from the shoulders up. After all, the head is perhaps the part of the body we feel the most instinctive need to defend. When we think we’re about to get hit, we raise our hands to cover the face. For that reason we feel that destroying another person’s head is something mighty and cathartic. It’s very final, very definite. If something got up without a cranium we’d feel it was cheating somehow. So when we crush a zombie’s skull, we feel like Conan The Barbarian!

Not only does the method feel pretty good, but zombies tend to be designed to be individually easy to beat, and it’s only in groups that they start getting dangerous. This means that you can normally hack your way through them like the Grim Reaper when he’s behind schedule, and again it makes you feel like a badass. Even if you lose and get dragged down beneath a thousand grasping hands, you can look back on the mountain of bodies you left in your wake and still feel smug despite your failure. 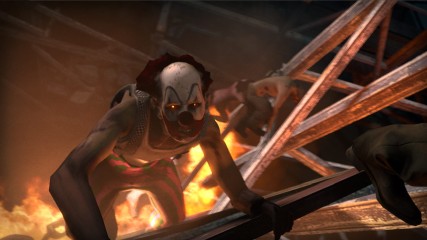 Hell, you can feel smug anyway. Everybody gets a kick out of feeling like they’ve outsmarted something else, we like to feel prideful about our own intelligence. Something as simple as catching a fly with a newspaper makes us go “Ha!” in way that we really don’t deserve. It’s the same principle with the undead. No matter who you are, however stupid you might feel, you can look at a zombie, something that is matched in nastiness only by its own idiocy, and feel comparatively like a king amongst men. Here’s an enemy you can always outsmart, always outmanoeuvre, always come out on top if you just think clearly. That’s kind of empowering, even if it is for the rather awkward reason that that combined intelligence of the enemy couldn’t outsmart the crowbar you’re hitting them with.

Of course, the other reason that zombies are so popular amongst creative teams is that the stories almost write themselves. You know the drill: Mysterious disease, areas quarantined by the army, small band of plucky but worried heroes trapped somewhere amongst the chaos, and suddenly we’re on a roll. Here’s the bit where someone you care about gets infected and you have to kill them, here’s the bit where you’re in danger from the military bombing the infected zones, here’s the bit where the heroes have a bit of infighting because they’re stressed out, so on and so on.

The broad applicability of the zombie template was proven with Red Dead Redemption: Undead Nightmare, Yakuza: Dead Souls and Call Of Duty: Nazi Zombies, three games series that had nothing to do with the undead until some enterprising young go-getter realised that you could just sprinkle some corpses over the original map, sell it for twenty quid and knock off for lunch.

But that just shows how little impact zombies have, doesn’t it? Tap water can go with any meal, but only because there isn’t any flavour. The Walking Dead is probably the game that did zombies best by just forgetting they were there for most of it. The undead in that game could have been completely interchangeable with any other threat, the point was that this was a character study of people in a difficult situation. Whereas games that orbit around zombies themselves get boring within ten minutes, because there’s nowhere left for them to go.

I think it’s fascinating to see just how homogenised games have become, how this single concept keeps coming up without anybody working on it thinking how tired it is. In the early nineties you could have practically any idea and it would get greenlit. Look at the Mario series. Yeah, Mario seems dull now, but originally somebody decided to make a game about an Italian plumber riding a dinosaur in a psychedelic land, throwing fireballs at giant turtles to save a princess of mushroom people from the largest turtle of all. It’s hardly predictable, is it? These days a game is considered dangerously experimental if the angry, white-skinned hero is wearing an odd hat.

It should be remembered that there’s nothing fundamentally wrong with zombies as a concept, but you can have too much of a good thing. What we need is for some other pop culture fad to take its place for a while, like pirates or ninjas. Ooh, or what about cowboys? It’s been too long since the last good wild west game, i.e., anything more than five minutes.

Anyway, Tales From The Borderlands: Episode 4 just came out, so I’m going to go and try that. And if I see a single undead minion or stumbling corpse, I might just bite someone.