You know that new game that’s “cinematic?” Well, bollocks to that.

It’s not a nuanced start to an article, I know, but it’s really starting to annoy me whenever I see that word come up when referring to a game. It crops up a lot on IGN reviews, enough that I’m wondering if they get paid to use it. They coo about how cinematic it is, but is that a good thing? In short, no. Not in the slightest.

We know what that phrase actually means, of course. It’s used for games like Uncharted and Call Of Duty. Titles that are defined by their set-pieces, by pretty graphics and impressive (but often meaningless) visual effects. Buildings exploding in slow-motion, detailed shots of vehicle crashes, scripted action sequences that you mustn’t deviate from in any way. Seriously, if you do anything but the exact actions they have in mind, they’re going to stamp on you, hard, and make you start all over again. That’ll teach you to have free will, you troublemaker.

The reboot Tomb Raider had a lot of this nonsense going on. You know the sort of thing I mean – sliding down a hill and rolling out of the way of debris, or parachuting in an uncontrollable direction and having to swing out of the way of trees. It’s a big thing for major games these days, to have these visually memorable stunts, but it’s pretty dull and unengaging. The whole thing feels weirdly artificial and seems to want to wrestle control from the player. They’re like overbearing mothers, slapping our hands whenever we try to do our own thing. 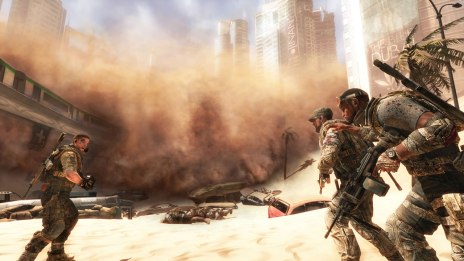 What could go wrong? No, don’t answer that.

I think there’s some weird belief permeating the whole industry that games should aspire to be like films, but I don’t get why. If a film became a slideshow so that it could be more “photographic,” or books started trying to clamp on your hands to be more like a video game, we’d think the creators had lost their marbles. Why can’t you commit to the medium you’re part of? Surely games are at their best when they embrace their nature and work with it, as opposed to against it?

Spec Ops: The Line is a phenomenal example of this. The writers understood that there was a unique opportunity here, one that was exclusive to this medium. See, their stroke of genius was to make the player commit awful atrocities in order to survive. What was the effect of that? Well, we felt responsible. In a story all about the damaging nature of guilt and the things that humans will do to survive, Yager used the interactive dynamic of the game to make us feel guilty. And god, did it work. You couldn’t do that with a movie, we’re only observing that as an outsider. But not here. Here, you’re the one who pulls the trigger and ends up with severe PTSD. If you’re lucky.

There are other examples of this. The Far Cry games are nicely organic, and why? Because they work with choices, not with a script. For example, you want to take out a stronghold of bad guys? Sounds cool, what do you feel would be a fun way to do that? You could go all sneaky and start backstabbing people like Ezio on a bad day. You could charge in with an LMG and turn everything into red mist. You could sit on the next hill along and start sniping bad guys as though they were heavily armed ducks. Or you could just set a tiger loose and have him take care of everybody for you. What floats your boat? We cater for all tastes here, my friend. 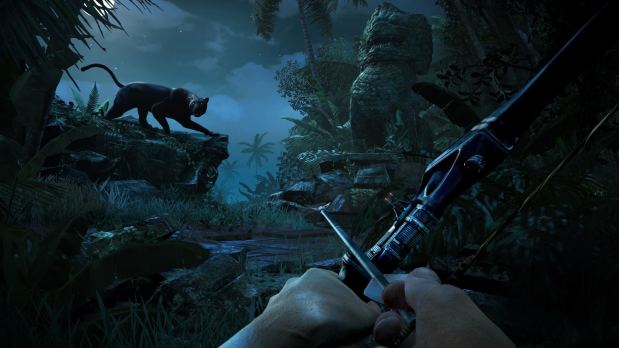 Don’t worry, folks. That panther went to a really nice farm with other big cats. Then I shot it with an arrow. That’ll teach it to try and hide.

These games work because they aren’t constantly fighting to be something else, and the worrying thing is that we’ve seen when games are trying to be more like movies. It’s not pretty.

Let’s be straight here – I did not like Heavy Rain. The story was absurd, the characters were boring, the tone was surreal and the gameplay was minimal. The sex scenes made me cringe and the irrelevant ninja fight dream sequence made me want to bang my head on the wall in frustration. The only good bit was watching one of the characters lop his own finger off. Call me cruel, but that was the only part of the story that seemed even somewhat grounded in reality.

I don’t really get why David Cage makes these games in the first place. They can be done well – Telltale’s recent trend of games, the one that started with The Walking Dead, proved that they live on strength of story and that you need to have your QTEs integrated well with the action to prevent it from being distracting.

But Heavy Rain’s story was abysmal, and the complex combinations of button pushes needed to perform the action scenes was like trying to bring somebody to orgasm with one hand whilst trying to make a caeser salad with the other. And Mr Cage, if we fail one of these, please don’t count it as a choice for god’s sake. If I choose to let somebody fall off a cliff, you can roll with that. It’s what I wanted. But don’t do it if I just missed the button prompt, because that leads to a story I’m not interested in, one I didn’t want.

I honestly don’t know who David Cage was making Heavy Rain for. Film lovers? Nope. The story’s too long and doesn’t have the tight structure that would be expected, not to mention that large portions of the game are filled by wandering aimlessly around, looking for the thing that wakes the plot up again. 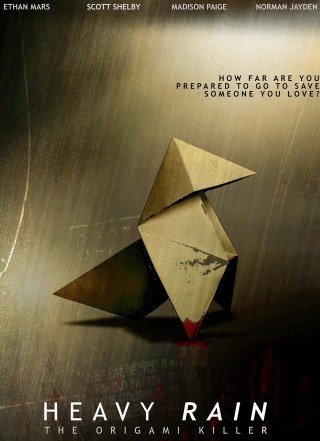 Does anybody else wonder if Mr. Cage is upset that he directs games and not films? Maybe we should start a Kickstarter to get him a job with Michael Bay. That’d make him happy, and also stop him making stuff like this. Win-win.

Is it for gamers? God, no. The gameplay is anaemic and reluctant to show up at all, like a cantankerous Baptist uncle at a gay wedding. Not to mention that any ending that isn’t the totally happy one feels like a failure on the player’s behalf. So who exactly is this mess of mechanics and motivations aimed at?

Well, it’s aimed at the gamer that hates video games. The snobby hipster, the aloof critic, the unimpressed academic, who plays Rayman Origins or Team Fortress 2 and sniffs at how there’s no depth to the writing. The one that loves anything pretentious, and doesn’t see the value in fun.

David Cage seems to view himself as an hauteur (though I don’t see it myself), and Heavy Rain is aimed at those who think like him, who would rather see fake depth than genuine joy and who are just happy about the fact that the game is different, rather than thinking about whether it’s engaging or even if it makes sense. It’s innovative, but that doesn’t mean much. Putting bleach in your eyes is innovative, but I’d be reluctant to call it an improvement.

It’s just weird to watch at this point. Is he embarrassed about the fact that he’s making a video game? Indigo Prophecy had an unforgivably awkward joke where a character makes fun of fetch quests whilst doing one of his own, almost like it wanted to weakly urge how unlike that trope it was. It also didn’t have a “Start Game” button in the menu. Nope, Indigo Prophecy opted for the “New Movie” button instead. I guess if you’re laying your cards on the table, you might as well do it with enough force to break that table in half.

But I can’t deny it – David Cage’s games are indeed cinematic, but it’s also why they suck. They’re basically going through a crisis of identity, and boy, does it show. Let’s not forget the key factor about cinema – it’s unwavering, it’s inflexible. Films don’t change depending on how we hit the play button, they’re not going to obey our instructions. They are inherently non-interactive, but a game is defined by interactivity. They need it like a swan needs a bad temper.

That’s the real issue to be noted – the more cinematic a game becomes, the more it strives to take control from us. Cameras pull away from our control to show events, characters perform moves we aren’t even aware they’re capable of doing in the middle of QTEs, freedom is compromised so that the game can tell its story, and not ours. This is fine in tiny quantities, but it gets annoying when it becomes overbearing. And I have one more way to prove it.

“Press F to pay respects.” That’s the future of cinematic gaming right there. It shouldn’t hope for much respect itself.