Bloody hell, what did I just see? The Microsoft HoloLens was one of those things that I hadn’t even heard of until I saw it demonstrated, at which point I had to pick up my jaw where it was dragging against the ground. Sorry, when did we get interactive 3D holograms? I kinda feel like I should have been informed earlier, that’s some Iron Man tech if I’ve ever seen it.

The HoloLens looks good, that’s the long and short of it. Don’t get me wrong, it’s an extravagance, and I’d rally against it being pushed into games in which it didn’t fit, but there’s a lot that would work with this new device. Pretty much anything in which you take a top-down view would fit nicely, though I’m baffled by the choice of Minecraft as an example. I can think of much better games that would suit it, like XCOM and Civilisation, or maybe even something like Hotline Miami. Who wouldn’t want to see a tiny digital psychopath, charging around with a katana in full hologram mode? Or peer down on a simulated battlefield like some disinterested general, pushing little soldiers towards the enemy with the tip of your finger? 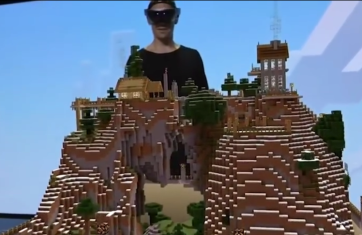 Foolish mortals! Your tiny, cuboid world is nothing compared to the might of Giant Glasses-Wearing Man!

The HoloLens looks best suited to tactical gameplay, and I hope it gets the attention it needs. It’s the best kind of gimmick, that which adds to the experience of gameplay rather than distracting from it. That said, I expect the technology will probably cost too much in the foreseeable future. Maybe get it when it’s going cheaper in 2020, but show your support for it now, otherwise we’ll be seeing more sputum like the Wii U controller.

Oh EA, why? No, that’s not me reciting random letters from the alphabet, it’s what I said when I was watching the fifteen minute Battlefront gameplay trailer.

It started off so well. I was really getting excited, because it was the sort of thing I wanted to see from E3, that I wanted to see from every presentation. Pure examples of core gameplay that’s mostly unedited and untampered with, why is that so much to ask? And I was as surprised as everybody else seeing EA resorting to such an honest advertising method, it would be like the government in 1984 suddenly spinning on their heels and turning into liberal hippies.

But the video seemed like a good thing, and the gameplay itself looked pretty nifty, especially bringing down the big AT-AT with a satisfying crash and hearing all the rebels wooping, like boozed-up frat boys crashing their friend’s car. There’s also interesting elements such as air strikes, which should add to the chaos a fair bit, and the playable heroes look pretty badass – basically, I was getting invested. 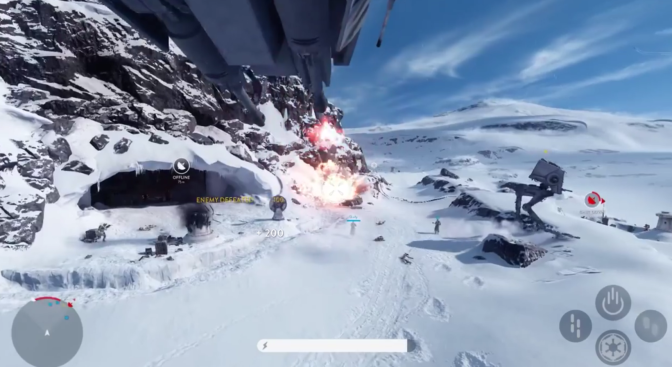 God, this is easy. I just can’t that horoscope prediction out of my mind, though… “You should beware of starships with wire guns.” What on earth could it mean by that?

But then, right at the end, they went and spoiled everything. In what was probably the most scripted bit of gameplay ever to emerge from E3, a single rebel hears the hum of a lightsaber activating behind him, and turns to see Darth Vader and several bodyguards looming over the poor squaddie dramatically.

And right then all my enthusiasm for the game trickled out of my trouser leg and started to make the room smell. EA had decisively shown that they were happy to show a gameplay trailer, but had thrown the whole thing into suspicion. How do I know that anything I saw was really valid, that it wasn’t the eighth take on an attempt to get that perfect shot? I don’t, quite frankly. And for that, they get a big thumbs down.

Oh, god, it looks like the angry brigade is back. Should I take my steroids now, or just wait until my soul patch has grown in and my douchebag bandanna has arrived in the post?

There’s always been something terribly cringeworthy about the Gears Of War franchise, the kind of thing that makes me want to roll my eyes and throw the disk away. I think it’s the way it seems to have so little self-awareness, the way it really believes it’s cool. And yet watching Marcus Fenix and chunky squad growl their way through the previous games was only boring and slightly irritating, because everybody on that team seemed to be utterly one dimensional.

Think about it. Fenix was basically angry 24-7, to the extent where he probably had to shout abuse at his cereal before he could eat it. Cole’s character was “Eighties action hero” and anything else got lost in the planning stage. Even Dom was no more than “Misses his wife quite a lot.” Yeah, OK, whatever. Why do we care about her, though? I guess the thirteen year old writing this shlock must have neglected to ask that question. There’s a reason that Bulletstorm felt the need to make fun out of this sort of thing, and it was right to do so. 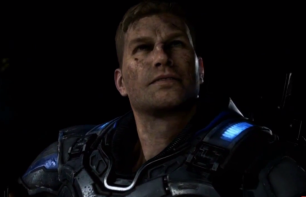 He might look cool, but whenever they get back to base he just won’t shut up about his Magic: The Gathering cards.

And then there’s the visual design, stuck halfway between the worst parts of Warhammer 40k and Halo, with a bit of grungy Half-Life thrown in for good measure. Everything is so overdone to the point where it looks silly. You can’t wear normal kevlar and helmets, even simplistic power armour like Masterchief. No, you have to fit inside a big, bulky flak jacket with glowing lights dotted all over it, that covers your chest and nothing else. You get given guns that are stupidly big and look more like farming equipment than firearms, and to top it all off we add the worst elements of fashion from a biker gang and set these wankers lose to fight the alien menace.

I can almost hear the protests of a confused recruit. “But sir, what if I get shot in the arm, where there’s no protection? What am I supposed to do then?”

At which point his sergeant stops doing weight-lifting and wearing tank tops, and other manly things, and spits his cigar out with rage. “What? You mean to say you haven’t built up enough muscle to render yourself bulletproof?! Get straight back in the gym, young man! Also, you’re going to be a main character, so put that helmet down! We’re getting you a headscarf and an over-designed weapon. And I’d better see a chinstrap beard by the time I get back!”

It seems that Gears 4 has taken all of these complaints and ran with them, at least in the gameplay trailer. Yes, that elaborate cutscene was a gameplay trailer. We have them bumbling around for several minutes, trying to fit through doorways and making snarky jibes about pondwater (no, really), before we see a lightning tornado and a monster, at which point it just sort of ends.

Well, at least it was quick. Thank god for smell mercies, eh?