Yes, we’re back, and yes, I know that Game Of Thrones has already had video game adaptations, though I should point out I haven’t played them yet. Telltale’s approach to the series is in my Steam wishlist, but I haven’t gotten round to buying it.

Anyway, last time we focused on what games would translate well to our TV screens. I voiced an opinion, everybody in the universe agreed with it, badabing badaboom. High scores all round, especially to me.

But this time we’re looking at what TV can bring to games, and whilst HBO’s softcore-porn-and-hardcore-violence series has been a huge success, it seems it hasn’t quite brought its A-game when it comes to the world of interactive media. The best translation is apparently the Telltale one, and even then it’s considered one of their weaker titles, at least in comparison to gems like The Wolf Among Us and Tales From The Borderlands.

But it seems to me that they’re all going the wrong way about it, because the key to Game Of Thrones has always been the enormous scale of Westeros. The decisions of an elite few shape the destinies of many, so why not reflect that? Get that right, add in some nude shots and throat-slitting, and you’re golden.

Of course, some Kings you could let die, to gain morale instead of losing it.

The idea I’ve been tossing around is a sort of hybrid of Sid Meier’s Civilisation V, XCOM: Enemy Unknown and Star Wars: Battlefront, with a bit of Shadow Of Mordor thrown into the mix. As you’ve probably guessed from this crazy cocktail, this might get a little complicated, so bear with me. Then again, if you’re a fan of the show, you can probably deal with complexity.

Firstly, you pick a house, and I don’t mean a nice two-bedroom semi-detached with a garden. No, you pick one of the seven houses to be a member of. Targaryen, Stark, Tyrell and so on. Each one will give you different perks accordingly, such as a bigger budget for the Lannisters or uglier soldiers for the Ironborn, that sort of thing. You could even pick the The Night’s Watch to fight against White Walkers, which would be fun.

Then you get your base somewhere in Westeros, like Winterfell or King’s Landing. You spend money and resources on certain aspects like technology or expanding your lands. Perhaps you fill your halls with food to prepare for an enemy siege or the threat of winter.

Then we have war! No, I don’t care why or who with. It could be one of the wars mentioned in the show, but it doesn’t have to be. Remember that George R.R. Martin’s massive world has some history behind it, so we could always play something from its past, or just take a little creative liberty.

So what then? Well, you play the game like a general for a bit, moving your armies around to prevent the enemy getting close to your base, protecting your resources and making tactical decisions. You spend money when you have to, take it back when you can, maybe run the risk of being indebted to Littlefinger, who will have demands in return.

And what happens when armies clash? Well, you drop down to join them. You take control of a commander in real time, fighting your way across the contested land and moving soldiers to strategic points, but still getting stuck in and slashing your way across the battlefield if you have to, which is where Battlefront and Shadow Of Mordor come into it. If you die, you take control of another commander, but your army loses morale. It might not even be a battle – you could demand the assassination of a target, only to play as the assassin. And if he fails, it’s permadeath, and your next attempt becomes that much harder when security is bolstered. Of course, you could always just bang the local red priestess and get things sorted that way. 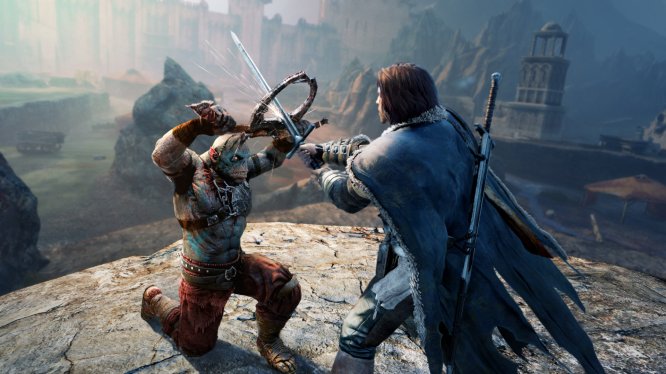 Think about it. Talion’s already got the job of standing on a big wall to keep out all the uglies from proper society. Swap out the bear cloak for a big black feathery thing, and the boring elf ghost for Ghost the dire wolf, and we’re ready to roll.

I guess I want to make combat a living, breathing thing. It’s always annoyed me how in otherwise superb games like Civilisation 5 that a whole battle – its strategy, its ideals, its people, its equipment – are all just boiled down to a vague percentage and a yes/no option. It just seems a bit lazy, a bit unworthy of the concept. What if I win, but I’ve committed soul-destroying horrors to do so? What if I lose, but the death of my men motivates other powers to get involved in some way? I don’t want it reduced to just statistics. It would make it too distant, and of course, we want to see the fight itself. We’ve earned that much.

Speaking of other powers, I definitely think that contracts and secret deals should play a big part of this game. Game Of Thrones is nothing without its nasty political backstabbing and two-faced advisers. We touched on Littlefinger (ew) and the idea of going becoming financially indebted to him with some rather worrying consequences. That should be part of a major aspect to the game, in which you can talk to many influential figures across the land and try to make decisions that benefit you. Well, I’d like to borrow some livestock, so how about a payment of ten grand a month for a year? Oh, you want my armies, do you? Well, how attached are you to that daughter of yours? I’ve seen her giving me the eye, and I think we can come to some sort of arrangement.

We may have to rethink the “child murder” policy, my Lord. It’s starting to affect your standing in the polls.

The endgame should of course be victory in war, but there should be multiple ways of doing that. Either a straight battle, in which you march to the enemy’s king and lop his head off; or perhaps a battle of the minds in which you destroy the morale of his kingdom. Cut him off, quarantine his lands, prevent any trading with the outside world and watch them starve. Then it’s only a matter of time before the civilians and soldiers surrender and bring the monarch to you. It’s evil, but when did that stop a Game Of Thrones ruler?

I gotta say, I’m pretty proud of this one. I like proper combat like in Shadow Of Mordor, and I like tactical stuff, but the two rarely work when they’re mixed into one. But what we’d have here is one influencing the other. Imagine that you move your army on the map to go against another military force, and the reports say that this should be an easy win. But when you get there you screw up on placing your soldiers, you have eight commanders killed and everybody gives up and goes home. The battle is lost, and suddenly you have to deal with the result.

Actions influencing decisions, decisions influencing actions. Round and round it goes. It would be complex, but intuitive, like Civ V. You can work it out as you go, because it all makes sense. Yes, stockpile food when you can afford to. Yes, put the archers on that high point. No, I don’t want to swap a dragon for that quilt your mother made.

And of course, never, ever go to any weddings. It’s just not worth the risk.