Yes, I admit it. I like good graphics in a game. It’s not the be-all-and-end-all, but it’s a nice bonus if the game has that “extra-polished” feel. For some games it can make a good experience into a great one. I like the online space simulator Elite: Dangerous, and there’s something kind of spell-binding about the visuals in that game. The very act of taking off has a wonderfully smooth and seamless feel to it, made all the more exciting by how utterly realistic it looks. It’s genuinely awesome, and for that experience alone, I’m not going to say that graphical quality doesn’t ever matter.

Welcome to Minecraft. Anybody caught bringing in an object with curves will be shot.

But how pretty a game looks is not the only way to rate. As I pointed out in the Minecraft article a while back, one of the most popular games in the universe has a look that wouldn’t have been out of place in 2001, a vague hybrid of origami and cut-price kid’s toys. But people seem to cling to the idea that the measure of a game is how she looks, not how she plays. And let me tell you, this is having rather nasty consequences on gaming as an industry.

But how did this come about? Well, I have a theory that I’ve been working through the past couple of weeks, and every bit of research I do seems to back it up. And whilst I’m proud to be right, I’m upset about the truth of the matter.

Where to start? Probably at the beginning, I suppose. Yes, that makes sense.

This horrible little life cycle starts with the release of a new console generation, just like the one we’ve recently had to endure with the three big offenders: the PS4, the Xbox One, and the… What’s this one? I’m not familiar with it. The Wii U? Has anybody heard of this? No? Huh, how strange. Perhaps I’m reading it wrong.

Anyway, every time that there’s a new console generation, we can depend on one guaranteed feature – more processing power! This is not a bad thing, I’ll admit that. I’m not hugely happy with how they put it to use, but fine. There’s nothing inherently wrong with a console that can process like Alan Turing on speed.

The problem is that this is a major selling point, and all the console manufacturers have quite a bit invested in demonstrating just how hard this ugly machine can think at us. It’s one of the reasons why you have to pay an eye-boggling three hundred quid, MINIMUM, so they’d better rub it in our face as hard as possible.

But how to bring across the amazing power of this machine in a way that the average punter will understand? It’s got to be pretty explicit, it’s got to distract him from that jawbone, for a start. How do they show how cutting-edge this thing is on screen?

You’ve guessed it, they settle on graphics. That makes sense, right? Gameplay might not come across as easily, or designers might be resistant to changing it, so suddenly a memo goes around to everybody who’s making games for these titans. Better graphics! Make it look spectacular, you understand? And any game made by the console makers themselves are always polished to a high sheen. Well, at least visually.

But then something starts to change in the mind of the public, and it’s down to the fact that all the console front-runners and exclusive titles are advertised to high-heaven. When Destiny came out I couldn’t walk down the street without seeing massive billboards for the stupid thing. And we all remember Titanfall and Ryse: Son Of Rome swanning around on the side of buses, don’t we? Big games and big names mean big expectations. Not only that, but these titles are seen as representative of the whole console’s library.

FEE-FI-FO- BANG! Heh heh. I’ve been wanting to say that all day.

And just like that, the bar is set. These bigwigs become the standard by which the graphics in all games are judged, at least in the mind of the general public. Yes, YOU lot out there. You’re responsible for this mess, at least partially. Bet you regret putting that jawbone down now, don’t you?

And it’s not fair for graphics to be this flashy, because artists and big skyboxes cost not just an arm and a leg, but a whole aeroplane disaster’s worth of discarded limbs. Making high-quality graphics is bloody expensive. It’s why nearly all indie games tend to gravitate towards cartoon visuals, like Limbo, Braid, Fez, Papers Please or Mark Of The Ninja. They have to accept and acknowledge the idea that they just can’t afford to make anything hyper-realistic. Bummer.

But then the public refuses to stop drooling over anything pretty, and suddenly the big companies have an idea. Why don’t we just keep blinging up all the visuals and not bother doing diddly-squat to the gameplay? After all, tweaking the mechanics is risky, it might not be well-received. But everybody loves a picture-accurate locale, right? Let’s just do that for ever and ever, and let culture stagnate, like a man face-down in a swamp.

It only gets worse, because at some point it gets to the ludicrous extent where they have to consider that they’re pushing the limits of the processing power again. The touted next-gen consoles aren’t powerful enough for our super-graphics! What are we going to do?

And thus they’re presented with a choice. They can reduce the graphical settings, or they can start to reduce the gameplay. And by this point they’re committed to option one. Did you hear that bang? That was any hope for gameplay innovation being shot by a ditch, sorry about that.

And what do you do then? You wait for the next console generation to come out. The cycle begins anew. Hip, hip, hoo-fucking-ray. 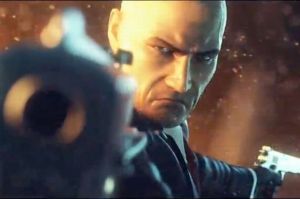 I know how you feel, bro. If I sold three million games and was told I wasn’t good enough, I’d get out the pistols too.

There’s other flaws I haven’t mentioned yet. What do you think having entire squadrons of animators and artists costs? They don’t do all that for free, you know. In fact, it’s one of the aspects of game manufacturing into which the most money is sunk, and it only makes profiting from it that much harder. A while ago, Square Enix was whimpering about how their three big products: Hitman: Absolution, Tomb Raider and Sleeping Dogs, all underperformed and hadn’t sold enough copies. They were considered failures.

Seriously? Hitman sold 3.6 million, Tomb Raider sold 3.4 million, and Sleeping Dogs managed a respectable 1.75 million. Not only that, but EA were telling us that Dead Space 3 had to move five million units to get a sequel, and Capcom were disappointed with Resident Evil 6, which actually managed to reach that monstrous figure! I can’t quite believe how inflated the budgets must have been. How on earth were you expecting to move that level of product? And, more to the point, how much did you spend making them look marginally better than other games?

What other problems are there? Well, let’s get an obvious one out of the way – some studios just can’t attain that level of graphical perfection. They just can’t. They don’t have the staff, or the money, or the time. So when that studio releases a game, the graphics of which are just “OK,” – well, suddenly they’re hammered from every angle. How dare you look just OK?! Get out of my sight and never come back! You’ve shamed this world and the civilisation that spawned you! Not to mention the fact that certain games I might mention would like to think that looking nice is all it takes, meaning you can get away with shit gameplay.

When actually I suspect that it’s the other way around. Team Fortress 2, World Of Warcraft and the Mario games, they all have basic cartoon graphics but reliably sell copies. Perhaps this might be because that people don’t care about super-realistic skin tones and rock textures as much as the industry thinks? Perhaps we just want a game that plays well and is generally fun?

That dragon started talking about texture quality! Get him!

Remember, I’m not against kick-ass graphics, nor am I opposed to a game looking accurate or realistic. But the costs involved, be they financial, cultural or just both at once, they’re too much at the moment. Can anybody realistically disagree with that?

What I wonder about is what the executives are going to do in twenty or thirty years. Once games get to the point where they just look unfailingly real, then they’re going to have to stretch their tiny minds to think of a new selling point.

I can just see them desperately watching footage of Call Of Duty: Really, Really Advanced Warfare, tearing out their hair and racking their brains in abject terror. “Oh god, it looks just like the last generation of games! We’ve reached the peak of what graphics can do! Christ, we’ll have to start advertising gameplay! People are going to have an idea about whether a game is good or not before they buy it!”

Oh, I’m waiting with bated breath for that day…